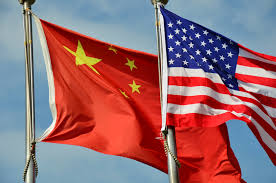 China: US Must Avoid ‘Seriously Endangering’ Relations with Us

China said Wednesday a visit by a top US cabinet member to Taiwan was endangering peace and stability in the region, with relations between the two powers at historic lows.

Washington’s de facto embassy in Taipei said US health secretary Alex Azar would lead a delegation to the self-ruled island, which Beijing claims as part of China and has vowed to one day seize.

“China firmly opposes official exchanges between the US and Taiwan,” Wang Wenbin, a spokesman of China’s Ministry of Foreign Affairs, said at a regular briefing.

“We urge the US to abide by the one-China principle… to avoid seriously endangering Sino-US relations, as well as peace and stability across the Taiwan Strait.”

The United States switched diplomatic recognition from Taiwan to China in 1979.

It remains the leading arms supplier to the island, but has historically been cautious in holding official contacts with it.

Neither side said when the trip would happen in their statements.

US Defense Officials Contradict Trump, Say No Indication of ‘Attack’ in Beirut Port

A man, woman wounded in Saudi shelling on Saada