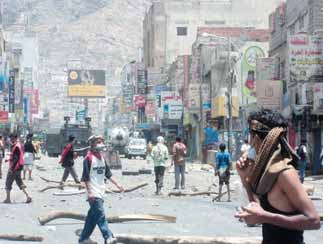 The city of Taiz has been witnessing an unprecedented state of chaos and security deterioration amid conflicts between mercenaries and agents affiliated with the Islah Party.

For days, Taiz has been witnessing the spread of armed gangs belonging to mercenary militias and rival agents, in which each side tries to eliminate the other. It also has witnessed an escalation of rape cases, the most recent of which was the rape and murder of a child.

The sources added that the gunmen beat the child, resulting in severe bruises on various parts of his body and a fracture that led to his death.

This heinous crime was met with widespread outrage by citizens on social media, in which activists circulated pictures of the child and the story of his rape, expressing condemnation of the crime, alongside a wave of outrage and widespread discontent in the Yemeni street.

According to human rights reports, child rapes have increased in Islah-controlled areas.

Amnesty International recently published a report accusing Islah militias of committing a number of rapes, asserting that the suspects were politically involved with local authorities controlling the city.

The report pointed out that there were also cases of rape not being officially reported as a result of the fear of reprisals against the parents by the rapists and their allies.

In a previous report published on its official website on October 7, Amnesty International revealed that 17 children in Taiz had been raped, affirming that “rape and sexual assault committed in the context of armed conflict are war crimes.”

“The leaders who do not put an end to the crimes of child rape, may themselves be held responsible for those crimes,” the report continued.

On Sunday, violent clashes broke out between armed factions backed by the Saudi-led coalition in Taiz province, local sources said.

According to the reports, armed confrontations took place in Tahrir Street in the center of the city between a group led by the so-called Ghazwan al-Mikhlafi and one led by Ghadr al-Shaabi.