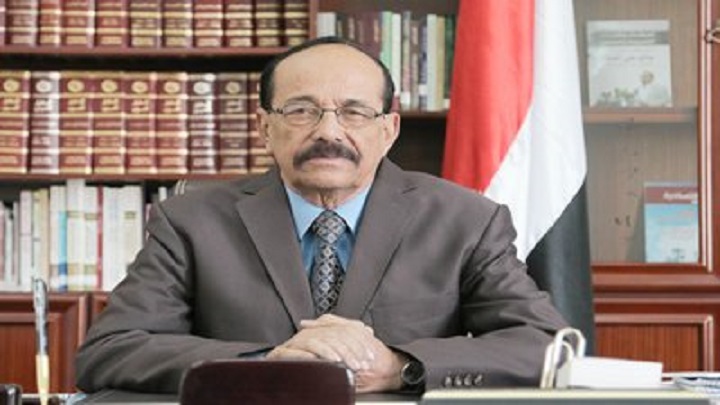 The head of the Shura Council, Mohammad Hussain al- Aidaroos, sent letters to the head of the Association of Senate and Shura Councils and similar councils in Africa and the Arab world, Abdul Hakim bin Shamash, the heads of the Senate and Shura Councils in the Association, the Secretary-General of the United Nations Organization, Antonio Guterres, his envoy to Yemen, Martin Griffiths, and the United Nations Resident Representative, the Coordinator of Humanitarian Affairs in Yemen ,Lise Grande,according to al-masirah website.

The letters included informing the continuation of daily crimes and violations against the Yemeni people, as well as the continuation of the aggressive forces in acts of maritime piracy and the detention of fuel and food ships off the port of Jizan and preventing them from reaching the port of Hodeidah despite having fulfilled the inspection procedures in Djibouti and obtaining the permits of the UN verification and inspection mission in the absence of any legal justification for these arbitrary measures of the aggressive forces and its tools.
The letters indicated that the blockade imposed on Yemen has doubled the supply situation and widened the map of human suffering of the Yemeni people, including the continued detention of the aggression of 18 oil ships, including four ships loaded with diesel and domestic gas and 14 ships loaded with gasoline and diesel.

The letters indicated that the released quantities of gasoline and diesel ,during the previous eighty days, represent a percentage not exceeding 27 percent of the total actual need in normal conditions during the same period ,and that the total financial fines due to detaining fuel vessels during the period from 2019 to July 2020 reached more than $ 100 million, which led to depriving citizens of the optimum benefit from the low prices of the international oil exchange.

Al-Aidaroos pointed out in the letters that the persistence in ignoring the human suffering of the Yemeni people was the result of the international silence applied to the crimes of the aggression and its suffocating siege, including the United Nations ‘move away from its founding charters and its disregard for the non-respect of the countries of aggression to the Sweden agreement and the use of citizens’ needs and their suffering as a tool of pressure for political purposes and the practice of collective punishment that targets millions of Yemenis and its negative repercussions on the human, economic, health and environmental aspects of life, in conjunction with the spread of epidemics and the flow of floods.
The head of the Shura Council called on the Association of Senate and Shura Councils and similar councils in Africa and the Arab world, the United Nations, the envoy of the United Nations Secretary-General and the United Nations Humanitarian Affairs Coordination in Yemen to play the required role, in a way that embodies the declared humanitarian goals on their part in pressuring towards lifting the comprehensive economic blockade , preventing the detention of oil ships and stopping the aggressive countries from the practices of maritime piracy.

The messages also demanded the Association , similar councils, the United Nations and its envoy to Yemen and the Coordination of Humanitarian Affairs to put pressure on the aggressive countries to end the obstacles in front of importing oil shipments and launching the detained ships and allowing their cargo to be unloaded in the ports of Hodeidah, whether loaded with oil, gas, food or medicine, and to neutralize the national economy in order to reduce the suffering of Yemenis.