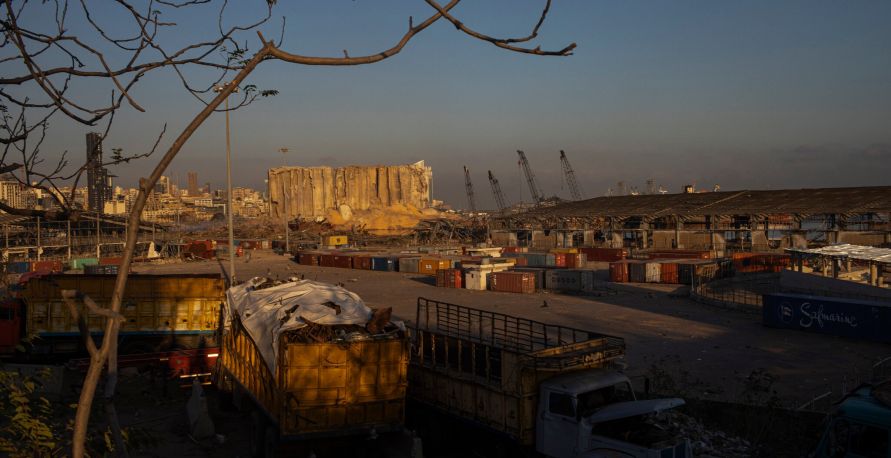 U.S. Contractor Knew of Explosive Material in Beirut Since at Least 2016

An American contractor spotted and reported the potential danger at least four years ago, but U.S. officials denied they were aware of the findings until last week, after the blast. An American contractor working with the U.S. Army warned at least four years ago about a large cache of potentially explosive chemicals that was stored in Beirut’s port in unsafe conditions, according to a United States diplomatic cable.

The presence of the chemicals was spotted and reported by an American port security expert during a safety inspection of the port, the cable said. Current and former American officials who have worked in the Mideast say the contractor would have been expected to report the finding to the U.S. Embassy or Pentagon. The chemicals — 2,750 tons of ammonium nitrate — exploded last Tuesday, Lebanese officials have said, shaking much of Lebanon, damaging buildings across a wide swath of central Beirut, killing more than 150 people and leaving hundreds of thousands homeless. The blast fueled widespread anger at Lebanon’s political elite and led to the resignation of the government on Monday.

The fact that the United States may have known about the chemicals and warned no one shocked and angered Western diplomats, who lost two colleagues in the blast and saw several others wounded. A senior State Department official denied that American officials were aware of the contractor’s findings and said the cable cited by The Times “shows that they had not” been informed. The official, who spoke on condition of anonymity to discuss a cable that was not public, said the contractor “made an unofficial site visit to the port approximately four years ago, and was not at the time a U.S. government or State Department employee.” The official said the department had no record of the contractor communicating his findings until last week, after the deadly explosion.

The blast, which registered as a minor earthquake, tore through a number of central Beirut neighborhoods, destroying homes, shutting down three hospitals and leaving streets strewn with shattered glass and downed trees. It also took a toll on Western diplomats, many of whom maintain missions in Beirut, Lebanon’s capital, and live in high-rise apartments with commanding views of the Mediterranean and of the port, putting them directly in the path of the explosion. The wife of the Dutch ambassador to Lebanon, Hedwig Waltmans-Molier, died from wounds sustained in the blast, the Dutch foreign ministry said. She had been standing in her living room when the explosion occurred.

A German consular officer, whose name has not been released, was also killed in the explosion. Many other diplomats from nations allied with the United States had their windows shattered and property damaged. The British and French Embassies both sustained damage, and windows were shattered in the mansion where the French ambassador lives. When informed by The Times about the contents of the cable, some expressed surprise and outrage that if the United States had the information, it was not shared.

“If confirmed, it would be very shocking to say the least,” said one Western diplomat whose apartment was damaged in the blast, speaking on the condition of anonymity in accordance with diplomatic protocol. A funeral in Beirut on Sunday for a victim of last week’s explosion.

The United States is one of the few Western powers that bases its embassy, consulate and diplomats well outside Beirut. The heavily guarded American diplomatic compound in the mountain town of Awkar is about eight miles from the capital. While many European diplomats live in apartments in central Beirut, many of which were heavily damaged in the blast, the United States requires all of its diplomats to live in the embassy compound and follow strict security procedures when they leave.

The American Embassy was located in Beirut until it was moved after multiple attacks in the 1980s, including an explosion in 1983 caused by a suicide car bomb that blew off the embassy’s facade and killed 17 Americans and 46 others. The diplomatic cable, marked unclassified but sensitive, was issued by the United States Embassy in Lebanon on Friday. The cable first lists Lebanese officials who knew about ammonium nitrate, a compound commonly used to make fertilizer and bombs, which arrived in Beirut in 2013 and was unloaded into a port hangar the next year.

The cable then says that an American security consultant hired by the U.S. military spotted the chemicals during a safety inspection. According to the cable, the consultant, under a contract with the U.S. Army, advised the Lebanese Navy from 2013 to 2016. The cable said that the adviser “conveyed that he had conducted a port facility inspection on security measures during which he reported to port officials on the unsafe storage of the ammonium nitrate.” The ammonium nitrate had been stored at Beirut’s port since 2014.

It is not clear when he conveyed the information; however, several current and former American officials who have worked in the Middle East say that the consultant would normally have conveyed his findings immediately to the American officials who oversaw the contract, in this case the embassy, State Department or Pentagon. Diplomats from countries affected by the blast said there was probably little that the United States could have done to force the Lebanese government to move the material. Lebanese port officials had also asked repeatedly that the chemical be moved, to no avail. Ammonium nitrate is a highly explosive material used for fertilizer and also highly valued by militants to make bombs. Bombs made with ammonium nitrate have caused some of the worst casualties that American forces have sustained in Iraq and Afghanistan. Just 100 pounds of ammonium nitrate can rip through a military convoy, causing significant casualties.

The cable also expressed doubt about the Lebanese government’s initial explanation about what ignited the ammonium nitrate: that a fire had started in a nearby hangar filled with fireworks and then spread, causing the more devastating ammonium nitrate blast that damaged much of Beirut. Instead, the cable raises the possibility that ammunition stored at the port may have created the force needed to set off the ammonium nitrate explosion. The cause of “the initial fire remains unclear — as does whether fireworks, ammunition or something else stored next to the ammonium nitrate might have been involved,” the cable states.

American officials floated the idea that an ammunition depot may have set off the explosion days after Lebanese officials pressed the fireworks theory and issued multiple denials that ammunition stored near the blast was to blame. The damage affected 40,000 homes, including at least 8,000 damaged and uninhabitable units. Over the weekend, Defense Secretary Mark T. Esper said that the American government was still unsure about what had caused the accident and that it might have been “a Hezbollah arms shipment that blew up.”

Hezbollah’s chief, Hassan Nasrallah, in a speech last week, denied that its arsenal had anything to do with the blast. “I categorically deny the claim that Hezbollah has an arms cache, ammunition or anything else in the port,” he said. Hezbollah is known to be careful with its weapons caches and explosive material, diplomats said. If they were using the ammonium nitrate at the port for their own purposes, it would be unusual for them to store it so carelessly. Diplomats in Beirut and former Pentagon and U.S. intelligence officials said that while Hezbollah had a firm grip on Lebanon and controlled the airport and many of the border crossings to Syria, it was thought to use land routes for smuggling in arms and not the Beirut port.

An Israeli official said, however, that the area of the port where the blast occurred was full of Hezbollah facilities, according to an Israeli intelligence assessment, although Israel had no conclusive evidence linking Hezbollah to the cache of ammonium nitrate.

Lebanon’s president, Michel Aoun, said on Friday that the cause of the blast had not been determined, but cited the “possibility of external interference through a rocket or bomb or other act.” President Trump raised the prospect last week that the blast had been caused by an attack, but multiple defense officials subsequently refuted the assertion. Lebanese citizens enraged by the blast staged huge protests and demanded an international investigation, an idea that Mr. Aoun dismissed. He called an international investigation “a waste of time.”

Mr. Nasrallah appeared to back the president, demanding that the Lebanese Army conduct the investigation. Analysts said that Lebanese officials might be blocking an international investigation to hide larger problems at the port, which is controlled by several political parties, including Hezbollah. “Why the Lebanese government may not want an international investigation is because perhaps they don’t want to expose the extent of their incompetence and corruption,” said Brian Katz, a former Middle East military and terrorism analyst for the C.I.A., who left his post last year. “Each party has a share of the port and uses it to smuggle all sorts of contraband, like weapons, automobiles and cash.”

The United States Embassy notes that many Lebanese do not support an investigation by their own government because of their lack of faith in the system. The government “would essentially be investigating themselves,” the cable concluded.