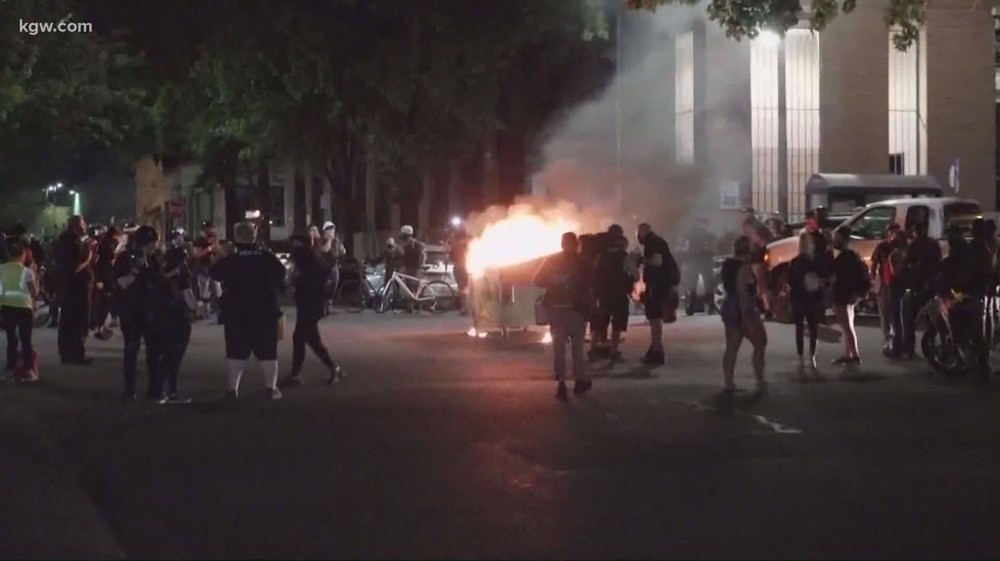 US federal agents have used tear gas and stun grenades against protesters, who gathered outside a federal building in Portland during the 84th consecutive night of demonstrations against racial inequality and police violence.

Several hundred people rallied on Wednesday night around a federal building that houses US Immigration and Customs Enforcement (ICE) offices in the city.

Protests that lasted until early Thursday, turned violent when police deployed tear gas and several riot vans, loaded with police, to the scene of the rally.

Early in the night on Wednesday, federal officers used pepper balls to push the protesters away from the federal building.

Protesters then returned to the ICE building and some of them broke several windows at the facility, spray-painted slogans, including “Kill ICE,” on the building’s exterior walls, and shined laser lights at agents inside.

Portland Police Chief Chuck Lovell declared the incident a “riot” in a statement on Thursday.

“Tensions are running high in our City and it is important for everyone to know PPB (Portland Police Bureau) members are doing everything possible to prevent violence and criminal acts and investigate incidents that have already occurred,” he said.

He said that protesters hurled rocks and bottles at agents who came out of the building and at police.

In another Portland protest that started late on Tuesday and lasted into early Wednesday, people broke out the windows of a county government building, sprayed lighter fluid inside and set a small fire inside the facility.

Portland has been the scene of protests since George Floyd — unarmed African American — was killed at the hands of police in Minneapolis back in May.

President Donald Trump has repeatedly described Portland protests as “lawlessness,” and praised the role of federal law enforcement officers during the rallies.

Democratic Presidential candidate Joe Biden, who addressed the nation in a formal speech on Thursday, promised to end what he described as “season of darkness” if he wins office in the November election.

Biden, who officially accepted the Democratic Party’s nomination for president, also referred to Floyd’s death, saying the US might be ready to end the “scourge” of racism.

“If you trust me with the presidency, I will be an ally of the light, not the dark,” he said.

He described the current situation in the US as a “perfect storm: The worst pandemic in over 100 years” and “the worst economic crisis since the Great Depression.’

The former vice president said that if Trump wins, “working families will struggle to get by … and yet the wealthiest one percent” will continue to gain billions.

The US economy continues to struggle, with unemployment rising amid the coronavirus pandemic, which has so far infected some 5,573,847 people and claimed the lives of at least 174,255, according to Johns Hopkins University.

‘US Attempts to Renew Sanctions on Iran Lack Legal Basis’