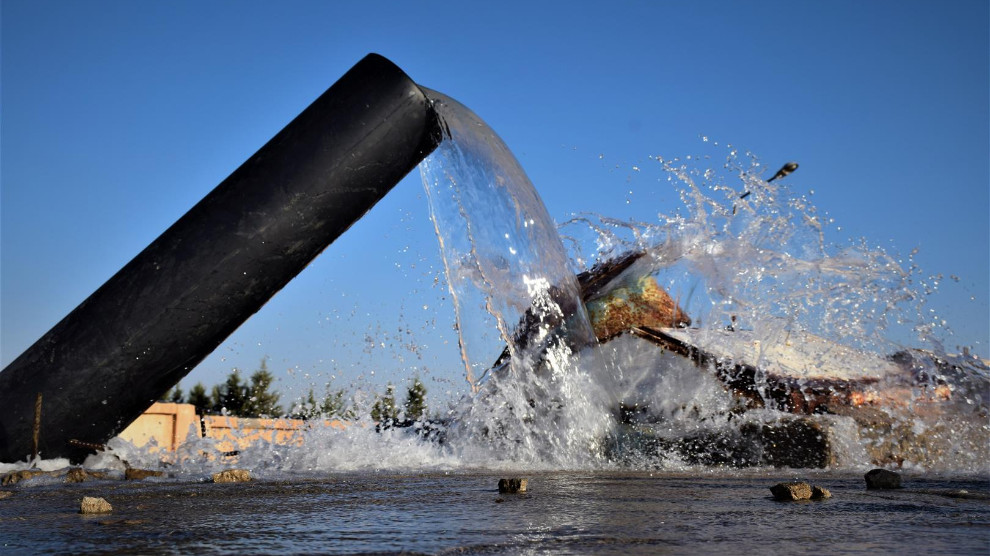 Erdogan commits ‘crime against humanity’ in Hasaka, Syria by cutting off water to one million civilians in the blazing summer heat

Turkish President Erdogan has sought to create an image for himself as the champion of religion. The Islamic State of Iraq and Syria (ISIS) also tried to claim they were following a religion, yet both to used water as a weapon of war.

Turkey is almost 100% Muslim and has made world headlines converting Christian cathedrals into Mosques. Turkish President Erdogan has been converting a secular democracy in Turkey, founded by Ataturk, into a Muslim Brotherhood haven, which follows Radical Islam as a political ideology, which is the same ideology as ISIS.

Water in Islam is considered as a gift from God, belonging to all equally, which has to be distributed equally among all living beings, humans, animals, and plant life, according to Cherif Abderrahman Jah, an Islamic academic and humanist.

ISIS used water as a weapon of war

The ISIS terrorists have often used water as a weapon of war in Iraq and Syria by cutting off supplies to villages that resisted their rule and as a tool to expand their control over the region’s water infrastructure.

They wanted to seize the water to prove they were building an actual state. In 2014 ISIS besieged the Syrian town of Kobane to secure a piece of the border with Turkey.

6 years later, 2020, the same scenario plays out, and in the same area, but ISIS has been defeated, and the Erdogan regime in Turkey has taken their place. Many experts feel ISIS and Turkey have been connected in their use of Radical Islam as a political tool, devoid of any connection to Islam, which is a religion.

ISIS was using water as a weapon, according to Tobias von Lossow of Berlin’s Institute for International and Security Affairs. He said, “IS uses water systematically and consistently. IS uses the entire range of possibilities and variations of water warfare.”

A person can survive without water for about 3 days; however, a person living in a very hot climate will sweat, causing them to lose more water, which leads to dehydration, causing extreme thirst, fatigue, and ultimately, organ failure and death. A person living in a hot place, like Hasaka, and having to perform laborious activities such as taking care of animals, or small children, could die in only a few days without water.

The role of the SAR in the crisis

Friday marked the ninth consecutive day without water in Hasaka. The Turkish occupation forces, and their Radical Islamic mercenaries, are endangering the lives of more than a million civilians

The SAR water authorities continue to try to provide clean drinking water, with cooperation from the Hasaka City Council and civil society groups, who used many water tankers to provide the locals with drinking water from Nafasha and al Himah Water Projects.

Chairman of Hasaka City Council Adnan Khajou, said that the daily quantity of water to be transported is 300,00 liters, which came from shallow wells dug by the locals, but is not drinkable and used only for cleaning.

The Turkish Army of occupation and its terrorist mercenaries in Ras-al-Ayn countryside continue to stop the operation of Alouk water project and to cut off the drinking water from Hasaka city, threatening one million persons with thirst and causing them to suffer from the spread of Coronavirus (COVID-19).

General Director of Hasaka Water Establishment Mahmoud Ukla said that since the Alouk Water Station was shut off by the Erdogan regime army, and their mercenaries, the summer temperatures have soared and water demand has increased, with the devastating additional threat of the COVID-19 pandemic, which needs water for hygiene.

Aziz Michael, geologist and water specialist, said that the Alouk water station is essential for water and it should be reopened.

The role of Turkey in the crisis

Turkey has a long history of using water as a weapon of war in Syria. In 1998 Erdogan had threatened to shut off water to Syria, which brought the two countries close to military conflict.

In May the water supply to 460,000 civilians in northeastern Syria was cut off by Turkey for the sixth time.

Syrian Observatory activists have reported Friday that residents have been protesting in Ras al-Ain, which is under Turkish Army occupation, and were calling for water, and electricity to be restored.

The role of the UN

On Friday, Ambassador Bashar al-Jaafari, Syria’s Permanent Representative at the UN, called on the UN Secretary-General Antonio Guterres to intervene immediately and to exert all his efforts to stop the Erdogan regime’s crime of cutting off drinking water for nearly one million Syrian citizens in Hasaka. In the phone call between al-Jaafari and Guterres, the Ambassador stressed that the Turkish aggression constitutes a war crime and a crime against humanity.

He said that the situation caused by this crime is acerbated by hot weather and the threat of the COVID-19 pandemic.

Guterres said that he has tasked the UN team in Syria and his Special Envoy Geir Pedersen with taking steps to address this matter, resolve it urgently, and deliver humanitarian aid to affected people. He said he will exert his best efforts by contacting the Turkish government to put pressure and resolve this matter.

Guterres has asked Pedersen to meet the representatives of the US, Russia, and Turkey in Geneva on Monday, as the committee for drafting a new Syrian constitution meets, which is part of the UN 2254 resolution which will pave the way to a peaceful solution to the Syrian conflict.

The Northeast section of Syria is split by various groups. The SAR based in Damascus controls areas, and has forces, checkpoints, and provides free health care and education to those areas it controls. The AANES is a separate group of Kurds, following a communist political platform, and they have become known to foreigners as “Rojava”. They have a military wing, the SDF, which was aligned with the terrorist group PKK, and they were in a coalition with the US military, who are now illegally occupying parts of the region while tasked with stealing Syrian oil for the Trump regime.

What is the solution?

The Kurdish leaders of the ‘Rojava’ area, and the central government of the SAR in Damascus, are in complete agreement that the solution of the water crisis in Hasaka must be the removal of all Turkish occupation forces, and their Radical Islamic terrorist mercenaries. The SAR is a secular government, and this is what the Kurdish leadership of ‘Rojava’ also claim as a core value of their administration. With so much in common, and both ‘Rojava’ and the SAR facing the same enemy, Turkey, and the possible resurgence of ISIS, it appears they may soon form renewed cooperation to re-take the land from occupation forces and defend the borders from all enemies.

Steven Sahiounie is an award-winning journalist