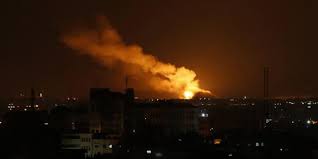 Israeli occupation warplanes launched air raids on targets in the cities of Khan Younis and Rafah the southern Gaza Strip, at dawn On Monday, claiming that bombing  was in retaliation of firing the incendiary balloons from the Gaza Strip.

According to Palestinian sources, the occupation bombed  agricultural land in the area of Al-Mills, north of the city, with rockets fired by reconnaissance aircraft and  warplanes, while no casualties or damage  have been reported.

In the same vein, Israeli artillery shelled two field control points near the Sofa military post in the south-east of the city and another near the Al-Serij gate east of Khuza’a.

In the City of Rafah, the Israeli artillery has targeted a field control post east of the city more than once.

According to the Israeli media, the occupation army bombs  targets in the Gaza Strip in response to the firing of  incendiary balloons from the Gaza Strip.