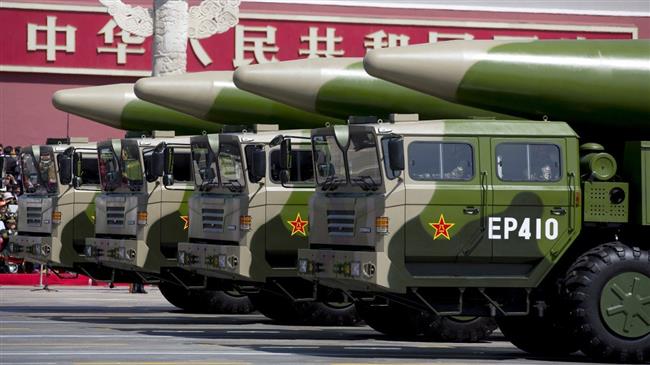 China Not to Allow US to Cause Trouble: Defense Ministry

China’s Defense Ministry says the country will not “dance to the tune” of the United States or allow it to “cause trouble,” as Washington ramps up hostile posturing against Beijing, including in the South China Sea.

Wu Qian, a spokesman for the Chinese Defense Ministry, also said at a monthly news briefing on Thursday that China hoped that the United States would take practical measures to create a “positive atmosphere” for high-level exchanges between the two sides to ease military tensions.

Washington and Beijing are currently at loggerheads over a host of issues, including trade, technology, Hong Kong, Taiwan, navigation in the East and South China Seas, and most recently, the coronavirus pandemic.

The South China Sea has recently become a flashpoint.

The United States has been trying to push back against what it views as China’s rising influence in the resource-rich South China Sea. Washington has sided with China’s rivals in maritime disputes in the sea and been routinely sending warships and warplanes there to assert what it calls its right to freedom of navigation.

Last month, two US aircraft carriers conducted tactical air defense exercises in the South China Sea, with Washington claiming that the maneuvers were “in support of a free and open Indo-Pacific.”

On Tuesday, China said the United States had flown a spy aircraft into a Chinese no-fly zone during live-fire military drills, calling the flight “naked provocation.”

On Wednesday, the Chinese military launched two ballistic missiles into the South China Sea, in a clear warning to the United States.

The US had earlier in the day blacklisted 24 Chinese companies and individuals over their actions related to disputed islands in the South China Sea.

On Thursday, China’s Foreign Ministry censured the US administration for imposing the sanctions against the two dozen Chinese companies involved in construction work in the South China Sea.

Ministry spokesman Zhao Lijian denounced the sanctions as “unjust” as the construction activities were taking place on Chinese territory.

China claims most of the strategic waterway and has been building artificial islands there and installing military equipment on them.

The US accuses Beijing of undertaking what it calls land reclamation.

On Wednesday, US Defense Secretary Mark Esper said China “seems to be flexing its muscles the most and conducting some of its worst behavior” in the South China Sea. He described the Indo-Pacific region as the epicenter of a “great power competition with China.”