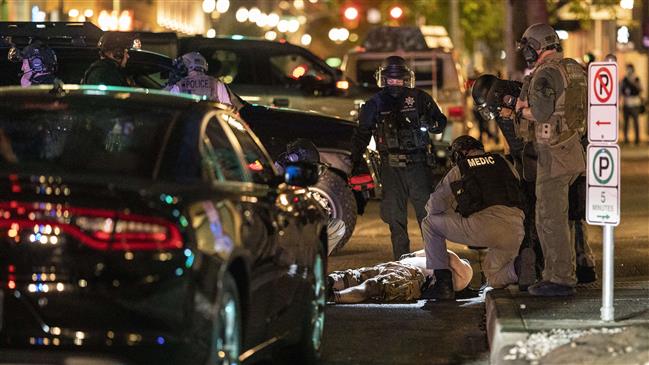 Black Lives Matter Protests Continue in US City of Kenosha

Black Lives Matter protests continue in the US city of Kenosha, Wisconsin, a week after the police shooting of an African American man, Jacob Blake.

On Sunday night hundreds of anti-racism protesters had gathered outside a police building to the east of the city center. They decried racial injustice and police brutality.

Police called the gathering illegal and ordered protesters to leave the scene, warning of arrests and the use of tear gas.

About 20 officers were seen in the videos posted online rushing from the building to clear the area, and arresting a handful or protesters.

Protests across the US have erupted again in recent days after the police shooting of Jacob Blake in Kenosha, Wisconsin, last week. Blake was shot multiple times in the back as his children looked on. His family said he is paralyzed from the waist down. Police also handcuffed him in hospital.

The brutal shooting of the African-American man has added to the nationwide anger across the US over racism and police brutality.

The protests swept through the US back in May, when another African American, George Floyd was choked to death by a white police officer in Minneapolis.

The city of Portland has also been the scene of more than 90 nights of protests against the racial discrimination.

The Portland clashes followed unrest in Kenosha, where prosecutors accused 17-year-old Kyle Rittenhouse of shooting dead two men and wounding another who were protesting against Blake’s shooting.

On Saturday night, one person was shot dead after a caravan of pro-President Donald Trump white supremacists clashed with anti-racism protesters in Portland.

Police and local media reports said the fatal shooting took place after a long caravan of vehicles, including hundreds of trucks full of Trump supporters, entered downtown Portland and led to fights, disturbances and collisions.

“We’re still suffering because there are two justice systems. There’s one for that white boy [Rittenhouse] that walked down the street and killed two people and blew another man’s arm off. Then there’s one for my son.”

Most of the protests in Portland have remained peaceful, though some demonstrations early on devolved into riots, leading to threats from Trump to send the National Guard to restore order.

The Democratic governor of Wisconsin on Sunday called on Trump not to “delay our work” by visiting the state.

Wisconsin Gov. Tony Evers urged the president to back out of a visit to the city of Kenosha planned for Tuesday in a two-page letter to Trump.