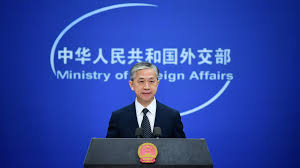 China Files Stern Representations over US House Legislation on Xinjiang

China says it has filed stern representations with the US House of Representatives over legislation that would restrict imports of goods produced in the western Chinese region of Xinjiang, where US officials claim companies use forced labor.

The US House of Representatives on Tuesday passed the so-called Uighur Forced Labor Prevention Act, in a declared attempt to stop what lawmakers said was systematic forced labor by the Uighur Muslim community in Xinjiang.

Chinese Foreign Ministry spokesman Wang Wenbin said on Wednesday that the reports of forced labor were false rumors made by some parties in the United States and the West.

Wang also warned that China would take all necessary measures to uphold the rights of Chinese companies and safeguard its sovereignty and development interests.

China rejects accusations of discriminating against the mostly Muslim-Turkic ethnic group of Uighurs — who make up about 45 percent of the population in Xinjiang — and accuses exiled separatist groups of planning attacks in the resource-rich region, which is strategically located on the borders of Central Asia.

Beijing says it is addressing underdevelopment and a lack of jobs in heavily Uighur areas such as Xinjiang.

He said US President Donald Trump’s administration had failed in “its duty to restrict the amount of emissions, and refuses to take minimum action to protect the earth.”

Trump has repeatedly dismissed warnings about the devastating effects of climate change and rejected climate science. Since taking office four years ago, he has scaled back or removed over 150 environment-friendly measures.

In November last year, he unilaterally withdrew his country from the Paris climate agreement, which had been reached in 2015.

Rouhani: US can’t impose on us neither negotiations nor war