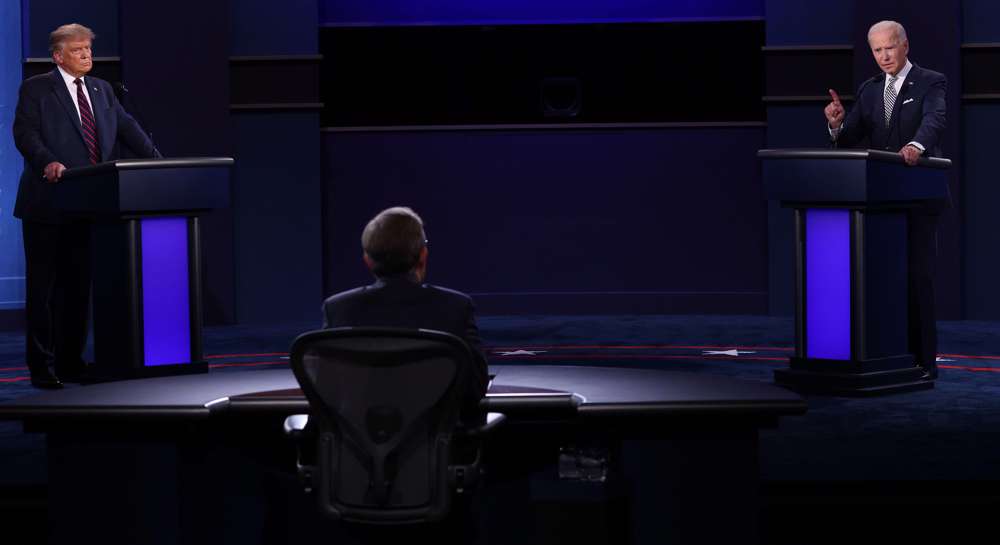 First US Presidential Debate for 2020 Race in Cleveland, Ohio

Republican and Democratic nominees, Donald Trump and Joe Biden, hold their first of three debates ahead of the 2020 presidential election.

The Tuesday debate was held in a venue in Cleveland, Ohio, where the two politicians mostly kept talking over each other and trading insults.

It was the first of three planned debates between the two candidates in the lead up to the election on November 3.

Here are some of the key quotes from the rather chaotic event:

Trump: “When you have 80 million ballots coming in and swamping the system, it can’t be done.”

Biden: “I will accept it, and he will, too. You know why? Because once the winner is declared once all the ballots are counted, that’ll be the end of it.”

Biden on Trump: “He wouldn’t know a suburb unless he took a wrong turn.”

Trump: “You can’t even say the words law enforcement because if you say those words, you’re going to lose all of your radical left supporters.”

Trump seemingly refused to say the phrase “white supremacists” – after Biden mentioned the Proud Boys, Trump said, “Stand down and stand by,” before immediately saying some people have to do something about “antifa.”

Trump: “I will tell you very simply we won the election, elections have consequences. We have the Senate and we have the White House and we have a phenomenal nominee respected by all.”

Trump: “I think that she (Judge Amy Coney Barrett ) will be outstanding. She will be as good as anybody who has ever served on that court. We won the election and therefore we had the right to choose her.”

Biden: “How many of you got up this morning and had an empty chair at the kitchen table because someone died of covid?”

Trump: “We’ve done a great job. But I tell you, Joe, you could never have done the job we’ve done. You don’t have it in your blood.”

Biden: “Folks, do you have any idea what this clown’s doing? I tell you what, he is not for anybody needing healthcare.”

Citizens martyred, wounded in bombing of the aggression forces in Taiz

2 Civilians martyred in the aggression forces’ bombing in Taiz