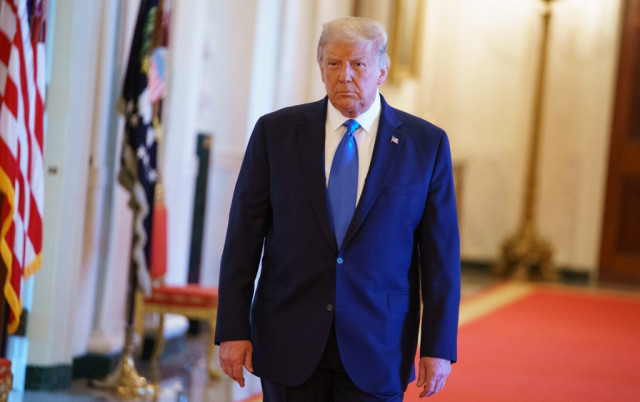 US President Donald Trump is facing torrent of criticism for renewing fears of voter intimidation after he urged his supporters to act as volunteer poll watchers on Election Day.

During Tuesday night’s first debate with Democratic challenger Joe Biden, Trump refused to urge his followers to remain calm during a prolonged vote-counting period after the November 3 election, if the winner were unclear.

The president, instead, called on his supporters “to go into the polls and watch very carefully because that is what has to happen, I am urging them to do it.”

“I hope it’s going to be a fair election, and if it’s a fair election, I am 100 percent on board, but if I see tens of thousands of ballots being manipulated, I can’t go along with that,” Trump added.

The call has raised fear of voter intimidation and polling place chaos across the country, with Democrats raising concern that it would bring right-wing groups with firearms to polling stations.

Pelosi called on voters not to be “intimidated by going to the polling places and see people who look like ICE [Immigration and Customs Enforcement] agents or law enforcement or something.”

“Believe me when I say it: You do it, and you will be prosecuted,” he said on Twitter.

“The President is blatantly urging his supporters to congregate at polling places, go inside, and ostensibly harass and intimidate voters,” he said.

“While there are authorized ‘poll watchers’ who monitor polls on Election Day, their duties are clearly laid out, and they do not include what President Trump has suggested,” Herring said.

According to the National Conference of State Legislatures, voter intimidation or interfering in the election process itself is illegal.

Each state has its laws regarding poll watchers, who are appointed in advance and whose primary role is to ensure that each party has a fair chance of winning an election.

Trump has repeatedly attacked the integrity of the election, and refused to transfer power peacefully, if loses the race to Biden.

Thomas Catothers said that “it is unprecedented in modern US history having a sitting US president attack the integrity of the election before an election — there is no parallel.”

Trump supporters have already caused violence during anti-racial protests in several cities, including Portland, where the clashes resulted in shooting death of a supporter of the president.

The Commission on Presidential Debates has vowed to change the debate format after the first chaotic face-off on Tuesday night embarrassed the American people on the global stage.

The 90-minute off-the-rails debate triggered criticism of Trump, who repeatedly interrupted Biden and the moderator.

This prompted debate organizers on Wednesday to adopt changes to allow for a “more orderly discussion,” with the next debate scheduled for Oct. 15 in Miami.

Biden has suggested a mute button might help limit interruptions.

The Trump campaign accused the organization of “moving the goalposts and changing the rules in the middle of the game.”

Trump accused the commission of siding with the Democrats.

The president also accused the debate’s moderator, Fox News anchor Chris Wallace of siding with Bide, calling the debate was a “two on one” fight.

The Chinese official newspaper Global Times wrote Wednesday that the debate “just showed the world a divided and chaotic US that is no longer an attractive superpower in terms of politics and soft power.”

It said that the event reflected “the recession of US national power.”

The aggression forces commit 4086 violations on Hodeidah over a month