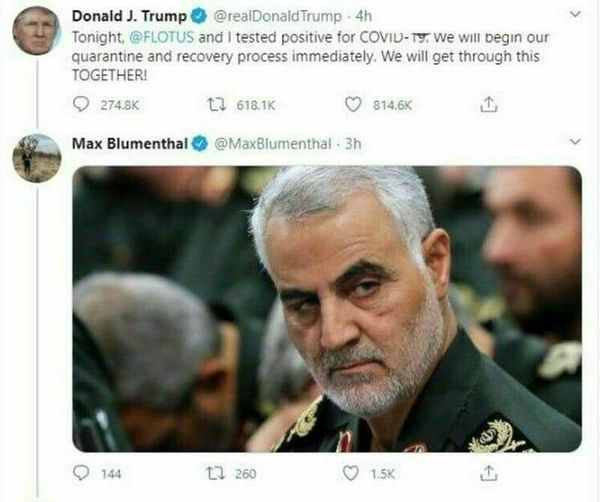 The famous US journalist, Max Blumenthal, replied to the US President Donald Trump’s tweet in which he announced that he and his wife Melania tested positive for the coronavirus by posting the photo of the former commander of IRGC’s Al-Quds Force, martyr General Qassem Suleimani.

On January 3، a US drone strike near Baghdad International Airport assassinated General Suleimani، former commander of the Quds Force of Iran’s Islamic Revolution Guards Corps. The attack — that also killed Abu Mahdi al-Muhandis، the second-in-command of Iraq’s Popular Mobilization Units (PMU) anti-terror group، along with several others— came while General Suleimani was on an official visit to the Iraqi capital.

Trump and his wife had tested positive for COVID-19 and gone into quarantine after holding rallies with thousands of people in recent weeks in the run-up to the Nov. 3 election

“We will begin our quarantine and recovery process immediately. We will get through this TOGETHER!” the president said in a late night tweet.