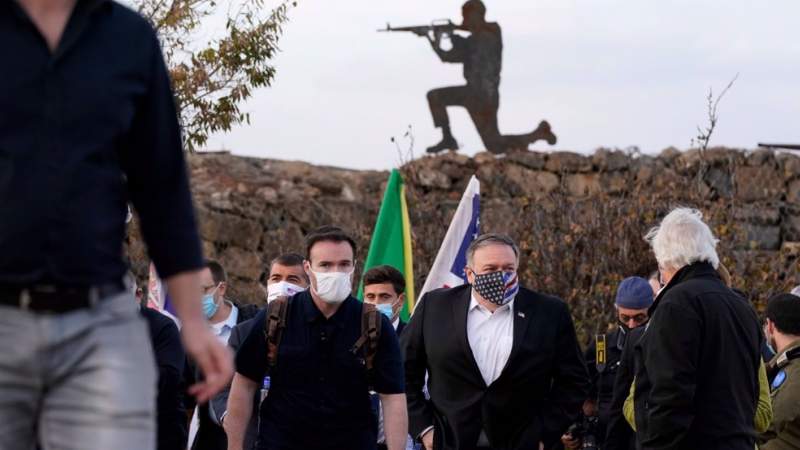 Iran has condemned a visit by US Secretary of State Mike Pompeo to the Israeli-occupied territories, saying his doctrine includes formalizing the regime’s occupation and whitewashing its crimes.

In a post on his twitter account, Iran’s Foreign Ministry Spokesman Saeed Khatibzadeh said Pompeo prioritizes the interests of Israeli prime minister Benjamin Netanyahu over those of the American people.

– Put Bibi’s interest above that of even Americans who put him in office;
– Formalize Israel’s occupation & whitewash Israeli crimes- no matter what;
– Silence criticism with bogus ‘anti-Semitism label’;
– Waste US taxpayers money on private family tours pic.twitter.com/vCRuy4rBvA

— Saeed Khatibzadeh (@SKhatibzadeh) November 20, 2020
Pompeo arrived in Israel on Wednesday for his last trip to the occupied lands before leaving office in January.

The US secretary of state also made a stop at the site of the baptism of Jesus in the Jordan Valley, where he announced that Washington would consider the Boycott, Divestment, and Sanctions (BDS) movement “anti-Semitic” and cut off government support for any organizations taking part in it.

The movement, which was initiated in 2005 by over 170 Palestinian organizations and later turned international, is meant to initiate “various forms of boycott against Israel until it meets its obligations under international law” and end its decades-long occupation of Palestine.

Pompeo then travelled by helicopter to Psagot settlement close to the West Bank city of Ramallah, marking the first time a top US diplomat had officially visited the illegal Israeli settlements. It came a year after he declared that Israeli settlements were “not, per se, inconsistent with international law”.

Palestinian Presidential spokesman Nabil Abu Rudeineh condemned Pompeo’s embrace of the Israeli settlements and accused the outgoing US administration of “active participation in the occupation of Palestinian lands.”

Most of the international community considers Israeli settlements to be illegal based on the Geneva Convention principle that an occupying power is barred from transferring its population into war-won territories. They also see the settler units as an obstacle to the so-called two-state solution to the decades-long Israeli-Palestinian conflict.

During the trip, Pompeo released a statement saying products from settlements could be labelled “Made in Israel”.

The BDS, however, accused the US and Israel of trying to silence advocacy for Palestinian rights.

“The BDS movement for Palestinian freedom, justice and equality, stands with all those struggling for a more dignified, just and beautiful world,” it said. “With our many partners, we shall resist these McCarthyite attempts to intimidate and bully Palestinian, Israeli and international human rights defenders into accepting Israeli apartheid and settler-colonialism as fate.”

After Psagot, Pompeo paid a similar visit to the occupied Golan Heights.

Syria appealed to the United Nations to condemn the “provocative” visit, calling it “a flagrant violation” of Syrian sovereignty.

Israel seized the Golan Heights from Syria in the closing stages of its 1967 Six-Day War with Arab countries, which also saw the regime occupy the Palestinian territories of the West Bank, East Jerusalem al-Quds and the Gaza Strip.

Tel Aviv unilaterally annexed the Golan Heights in 1981 in a move not recognized internationally.

Damascus has repeatedly reaffirmed its sovereignty over the Golan Heights, saying the territory must be completely restored to its control.

In March 2019, US President Donald Trump signed a decree recognizing Israeli “sovereignty” over the occupied Golan during a meeting with Netanyahu in Washington.

Protests in Chile call for end to war against Yemen