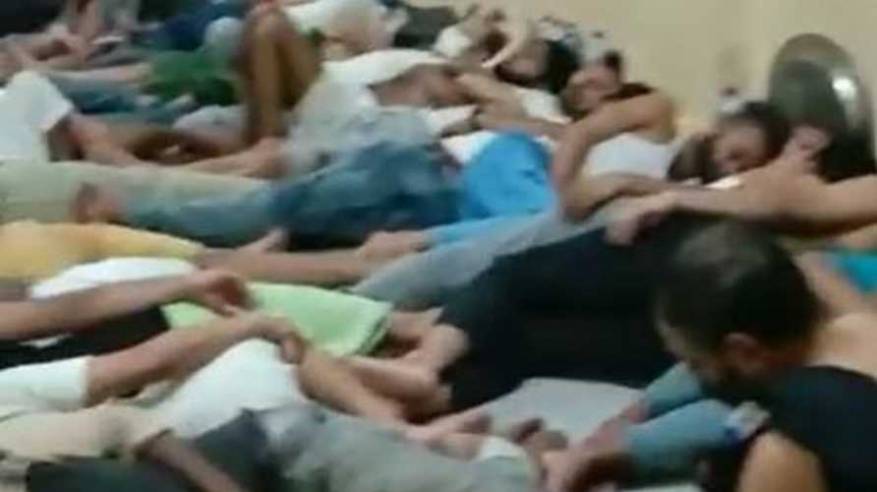 A deportation center in Riyadh is holding hundreds of mostly Ethiopian migrant workers in conditions so degrading that they amount to ill-treatment, Human Rights Watch said today. Detainees alleged to Human Rights Watch that they are held in extremely overcrowded rooms for extended periods, and that guards have tortured and beaten them with rubber-coated metal rods, leading to at least three allegations of deaths in custody between October and November. The Saudi authorities should immediately release the most vulnerable detainees and ensure that detention is only used as an exceptional measure of last resort. It should immediately end any torture and other ill-treatment, and ensure that detention conditions meet international standards.

“Saudi Arabia, one of the world’s richest countries, has no excuse for detaining migrant workers in appalling conditions, in the middle of a health pandemic, for months on end,” said Nadia Hardman, refugee and migrant rights researcher at Human Rights Watch. “Video footage of people crammed together, allegations of torture, and unlawful killings are shocking, as is the apparent unwillingness of the authorities to do anything to investigate conditions of abuse and hold those responsible to account.”

In November 2020 Human Rights Watch spoke by telephone with seven Ethiopian migrants detained in a deportation center in Riyadh, and with two Indian men who were detained in the same facility before they were deported. The majority of detainees were arrested and detained by the authorities because they did not hold valid residency permits.

All interviewees said the Saudi authorities kept them in cramped, unsanitary rooms with up to 350 other migrants for months on end. Two men have been in detention for over a year. Detainees explained they do not have enough room to all lie down, so some sleep during the day and others at night. Guards have not provided mattresses, just unclean blankets. Photo images and video corroborated the witness accounts, including two videos showing hundreds of men either standing or lying on top of each other in a crowded room with piles of rubbish and debris in the corner.

Despite being in the middle of a global health pandemic, detainees described how overcrowding has made social distancing and hygienic living impossible. Interviewees said guards took their temperature at the outset of their detention, but no other measures are in place to minimize the spread of Covid-19. Migrants said they shared between two to five toilets with 350 other detainees. The detainees said they had no access to shower facilities and no soap has been distributed. Detainees use the water from faucets above squat toilets for bathing.

All interviewees said that guards wearing green, black, and grey uniforms had either assaulted them or that they had witnessed guards beating other detainees with rubber-coated metal rods. Beatings usually occurred when detainees asked for medical attention or complained about the conditions. Six out of nine interviewees said that they witnessed guards beat migrants so severely that they were taken from the detention room and were never returned. In one case, a 27-year-old man from Ethiopia witnessed the unlawful killing of three other detainees, two of whom were beaten so badly by the guards that they died immediately as a result of their injuries; the third died two hours later. Human Rights Watch was not able to independently verify the allegations.

The detention of migrants in deplorable facilities in Saudi Arabia is a longstanding problem. In 2014, Ethiopian nationals in the Saudi capital, Riyadh, told Human Rights Watch that thousands of foreign workers were being held in makeshift detention facilities without adequate food and shelter, before being deported. In 2019, Human Rights Watch identified approximately ten prisons and detention centers where migrants were held for various periods. In August 2020, Human Rights Watch identified three detention centers in Jizan and Jeddah province where thousands of Ethiopian migrants were being held in deplorable conditions since they were pushed from northern Yemen in April.

An October 2020 report estimated that there are approximately 10 million foreign workers in Saudi Arabia, spread over most sectors of work, especially the energy and service sector. Saudi Arabia has carried out regular sweeps of undocumented migrant workers, including major arrest campaigns beginning in November 2013 and August 2017. About 260,000 Ethiopians, an average of 10,000 per month, were deported from Saudi Arabia to Ethiopia between May 2017 and March 2019, according to the International Organization for Migration.

Seven out of the nine migrants Human Rights Watch spoke to said they were undocumented when they were detained by the Saudi authorities. Two interviewees had valid residency permits, which the Saudi authorities ignored, including one Indian man who had worked in the country as an engineer for 25 years but was accused of selling vegetables, a profession he was told is restricted to Saudi nationals.

None of the detainees Human Rights Watch interviewed said they had been given an opportunity to challenge their arrest or detention, including those with valid residency permits. Prolonged detention without access to judicial review amounts to arbitrary detention and is prohibited under international law.

The Saudi government should investigate allegations of abuse and unlawful killings at migrant detention centers, and appropriately discipline or prosecute those found responsible.

The absolute prohibition on torture and cruel, inhuman or degrading treatment in international law is guaranteed in the UN Convention Against Torture, to which Saudi Arabia is bound. Torture includes the intentional infliction of severe pain or suffering by a public official for purposes such as intimidation and coercion. The Special Rapporteur on Torture has deemed administration of severe beatings a form of torture, as has the Human Rights Committee. Saudi Arabia should open up its detention and deportation centers to inspection by experts in torture prevention. Beyond this, Saudi Arabia should ratify the Optional Protocol to the UN Convention Against Torture which make such inspections mandatory.

Saudi authorities should only use migration detention as an exceptional measure of last resort and ensure that its migrant detention and deportation centers comport with international standards under the UN Standard Minimum Rules for the Treatment of Prisoners (“Mandela Rules”). Every detainee should be brought physically before a judge for judicial review of the legality and necessity of their detention within 48 hours of being detained. Detainees should be released, as a rule unless those detaining them can show a clear legal and factual necessity, on an individual basis, for their detention pending trial or imminent deportation.

Saudi authorities should urgently engage with Ethiopian authorities and other governments whose nationals are languishing in Saudi Arabian detention and deportation centers, the International Organization for Migration, and the UN refugee agency (UNHCR), to arrange for the voluntary return of migrants who remain in detention and assist with their reintegration support in their country of origin, including psychosocial (mental health) services.

UNHCR should have complete access to assess any claim for refugee status and should also assess whether any organized return facilitated by the UN’s humanitarian agencies is voluntary. The Ethiopians interviewed by Human Rights Watch all expressed concern about returning to a country currently facing a rights crisis as well as conflict in the eastern region of Tigray which has resulted in mass displacement into neighboring Sudan.

The Saudi government should sign and ratify the 1951 Refugee Convention, and the 1990 International Convention on the Protection of the Rights of All Migrant Workers and Members of Their Families. It should enact refugee law consistent with international standards, and establish fair asylum procedures for foreign nationals who may be at risk of persecution in their home countries, Human Rights Watch said. In the meantime, it should allow UNHCR to exercise its mandate to determine the refugee status of asylum seekers and facilitate durable solutions for those recognized as refugees, including, where appropriate, integration in Saudi Arabia.

“Saudi Arabia should act fast to end the abusive conditions in the Riyadh deportation center and contain the potential of a devastating outbreak of Covid-19. Governments with nationals inside the facility should pressure the authorities and do all they can to facilitate voluntary repatriation,” Hardman said.