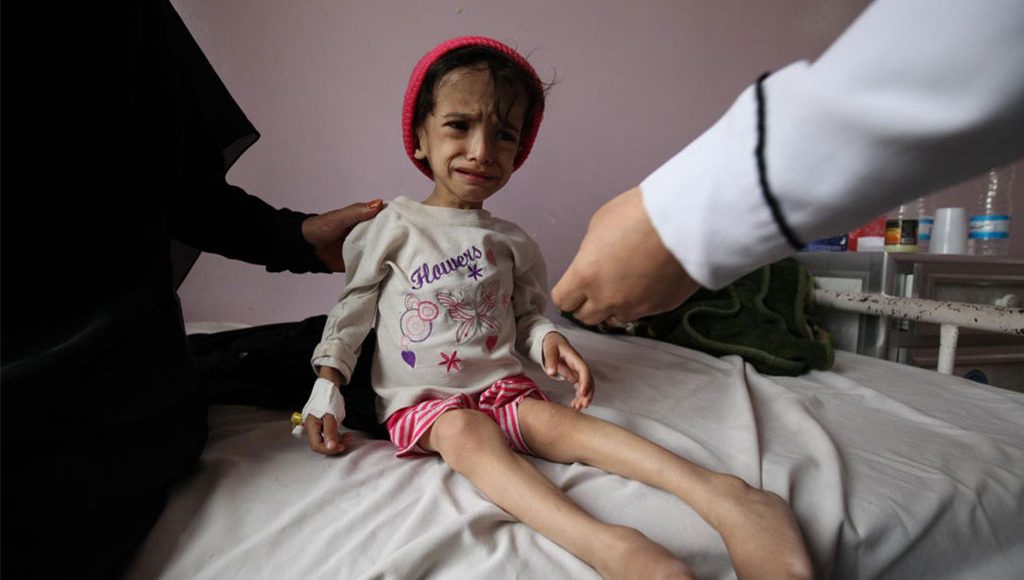 Saudi-Led Aggression Kills Over 3,800 Yemeni Children, as Half of Minors Suffer from Malnutrition: Health Minister

The Yemeni minister of health says the military onslaught by Saudi Arabia and its regional allies has claimed the lives of over 3,800 children in the crisis-hit Arab country, while more than 400,000 minors are acutely malnourished and require urgent care.

Speaking at an annual medical conference in the capital, Sana’a, on Thursday, Taha al-Mutawakel said children are among the groups that suffer the most as a result of the Saudi-led aggression and siege, noting more than half of children in Yemen are severely malnourished and the military alliance does not shy away from targeting children’s hospitals.

Mutawakel then pointed to the Saudi-led air attack that hit a school bus at a crowded market in the northern Yemeni province of Sa’ada back on August 9, 2018 and killed 51 people, including 40 children, saying the strike is a clear example of the extent of crimes being perpetrated by the Saudi-led military alliance against Yemeni children.

Yemen’s health ministry says 100,000 newborns die every year in the impoverished country due to Saudi aggression and blockade.

He also criticized as “a great shame” a decision by UN Secretary General Antonio Guterres on June 15 to remove the Saudi Arabia-led military coalition from an annual blacklist of child killers.

“The previous regime did not offer any medical facilities concerning pediatric medicine and surgery. The high rate of congenital malformation among Yemeni children is due to weapons being used by the Saudi-led coalition in its bombardment campaign,” Mutawakel said.

The Yemeni health minister went on to lambast the UN’s negligence, stating that the world body has so far failed to take any measures to save the lives of the conjoined twins, who were born last week at al-Sabeen hospital.

Saudi Arabia and a number of its regional allies launched the war on Yemen in March 2015, with the goal of bringing the government of former president Abd Rabbuh Mansur Hadi back to power and crushing the popular Ansarullah movement.

UN’s FAO: Five million Yemenis will likely be ‘living just one step away from famine’ next year

FAO warns that 5 million people in Yemen “will likely be living just one step away from famine” next year, urging immediate support.

Earlier this month, the UN Office for the Coordination of Humanitarian Affairs (OCHA) put the death toll from the Saudi-led war on Yemen at 233,000.

The Houthi Ansarullah movement, backed by armed forces, has been defending Yemen against the Saudi-led alliance, preventing the aggressors from fulfilling the objectives of the atrocious war.

The aggression jets launch many raids on Marib,al-Jawf,al-Bayda,Hajjah