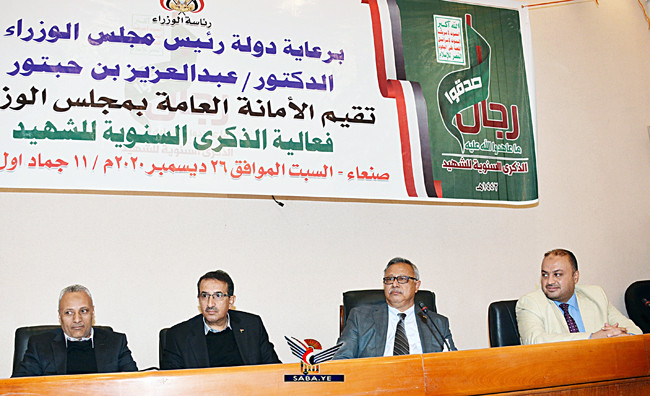 PM: Martyr’s anniversary is opportunity to remind everyone of the responsibility towards families of the martyrs

Prime Minister Dr. Abdulaziz Saleh bin Habtoor considered the annual anniversary of the martyr an opportunity to remind everyone’s responsibility towards the families of martyrs.

“We should honor our martyrs by mentioning their exploits and heroism, caring for their families and helping them to live in dignity, out of gratitude and appreciation for their sacrifices for the sake of the homeland,” Dr. bin Habtoor said, during his participation in the event organized by the General Secretariat of the Cabinet in Sana’a on the martyr anniversary.

He pointed out that the Salvation Government discussed in more than one meeting the issue of caring for the families of the martyrs and the handicapped and took important decisions to achieve this goal.

The Prime Minister praised the sacrifices and the level of steadfastness and patience offered by Yemeni families, especially the families of martyrs and wounded.

He reviewed the crimes and incinerators of the US-Saudi aggression coalition against the Yemeni people in homes, public squares, wedding and funeral halls, and work and production sites for years.