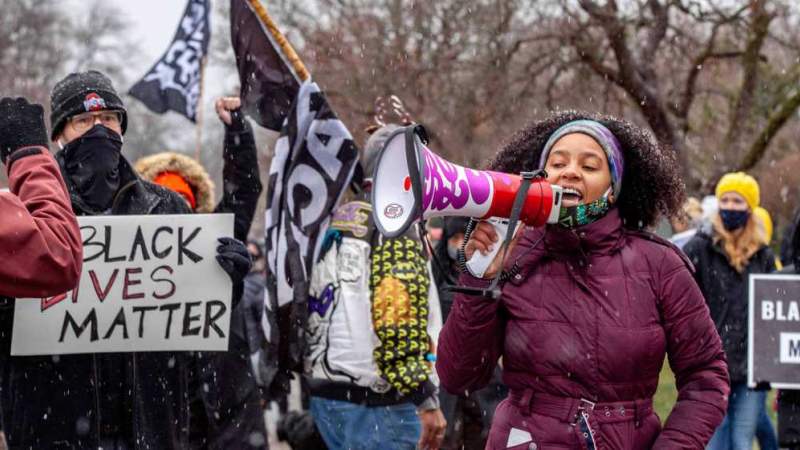 The fatal shooting of an unarmed Black man by a police officer in Columbus, Ohio has sparked a fresh wave of protests against racial injustice and police brutality in the country.

Andre Maurice Hill, 47, was shot several times on Tuesday morning by a police officer who had turned off his body camera.

The incident happened when police responded to a non-emergency call shortly after 1:37 a.m. When the officers arrived at the home, Hill was inside a garage whose door was open.

The 60-second body camera look back shows the man walking toward the officer holding a cell phone in his left hand, but his right hand was not visible.

“We have an officer who violated his oath to comply with the rules and policies of the Columbus Division of Police,” Quinlan said in a statement. “This violation cost an innocent man his life.”

According to local media, there had previously been reports of complaints about Coy using excessive force.

Hill, the second African-American killed by police in Columbus in less than three weeks, was visiting someone at the home and was not carrying a weapon.

On December 4, Casey Goodson, a 23-year-old Black man with no criminal background, was shot dead by a Franklin County Sheriff’s Office deputy.

He was returning home and, according to his family, he was holding a sandwich which law enforcement mistook for a gun.

The latest shooting comes after a summer when the US was the scene of historic protests against racial injustice and police brutality, sparked by the killing of African-American man George Floyd.

The 46-year-old, also unarmed, died after Derek Chauvin, the white officer, knelt on his neck and pinned him to the ground for nine minutes in Minneapolis, Minnesota on May 25.

“Once again officers see a Black man and conclude that he’s criminal and dangerous,” said lawyer Ben Crump on Wednesday.

He was “known to the residents of the home where his car was parked on the street,” he said Wednesday at a press conference, describing him as a “guest… not an intruder.”

Ginther also said he was “very disturbed” that the two officers did not give first aid to Hill and called for Coy’s “immediate termination.”

PM: Martyr’s anniversary is opportunity to remind everyone of the responsibility towards families of the martyrs