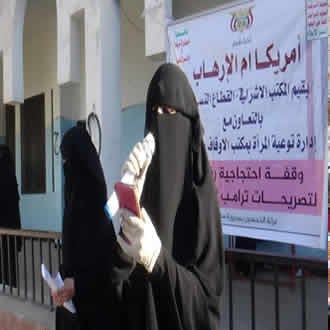 The women’s sector in the governorate is currently witnessing a great movement in establishing vigils to denounce the American decision to designate Ansarollah as a terrorist organization.

More than 50 protests were carried out in cooperation with the Women’s Awareness Department at the Endowment Office, and women’s protests are still continuing in the directorates under the slogan “terrorism is an American industry”.

The included statements issued by the Women’s Endowment which is summarized by emphasizing the continued mobilization and establishment of the sit-ins to reject the decision, solidarity, circumvent and strengthen steadfastness in the face of aggression.