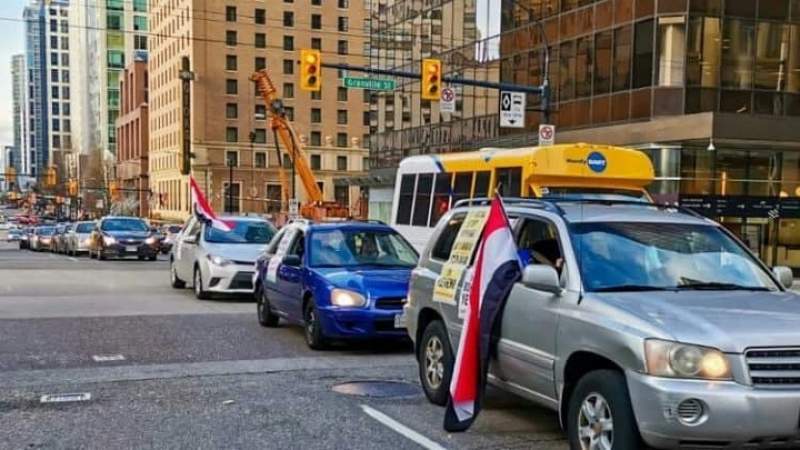 Protests in Canada Call for End to War on Yemen

The protest against the war on Yemen in Vancouver, Canada, joins other actions around the world to show solidarity with the Yemeni people and demanding an end to the Saudi-led war against Yemen.

The event began with the gathering of dozens of members of the Yemeni community and Canadian activists raising Yemeni flags in their cars with posters and slogans calling for an end to the aggression on Yemen.

“We came out today in a response to the international call to stand with Yemen in coordination with the Yemeni-Canadian community at a car caravan in Vancouver, calling for an end to the war on Yemen and an end to the arms sales to Saudi Arabia” said Alison Bodine, chair of MAWO.

The cars then drove out in a very visible and noticeable convoy that roamed the streets of Vancouver for long hours hoping to deliver messages to the Canadian people.

Participants called on Canadian Prime Minister Justin Trudeau and US President Joe Biden to stop all arms deals with Saudi Arabia and the United Arab Emirates (UAE), and stop the war on Yemen.

Ali Yerevani, editor-in-chief of the Fire This Time newspaper, a Canadian monthly newspaper concluded, “we support Yemen’s rights to self-determination, freedom and independence, as we went out today on an international day to stand with Yemen against the aggression, bombing and siege on Yemen by Saudi Arabia, the UAE, with the support the US and its allies.”

The protesters denounced the continued sale of weapons to these criminal and unjust states (Saudi Arabia and UAE) by the US, Canada, Germany, France, Italy and other countries.

Azza Rojbi, Secretary of MAWO, praised the international solidarity in several countries that is coming out to support Yemen against the Saudi-UAE aggression.

” Our action in Vancouver on January 23rd is part of the Global Day of Action. On Monday, January 25th, we are going to join the Global Online Rally and the social media campaign for Yemen by sending pictures and posts against the war on Yemen, to media in Canada, ” she added.

Al-Houthi: We are not afraid of Americans, our people affirmed the steadfastness in facing aggression