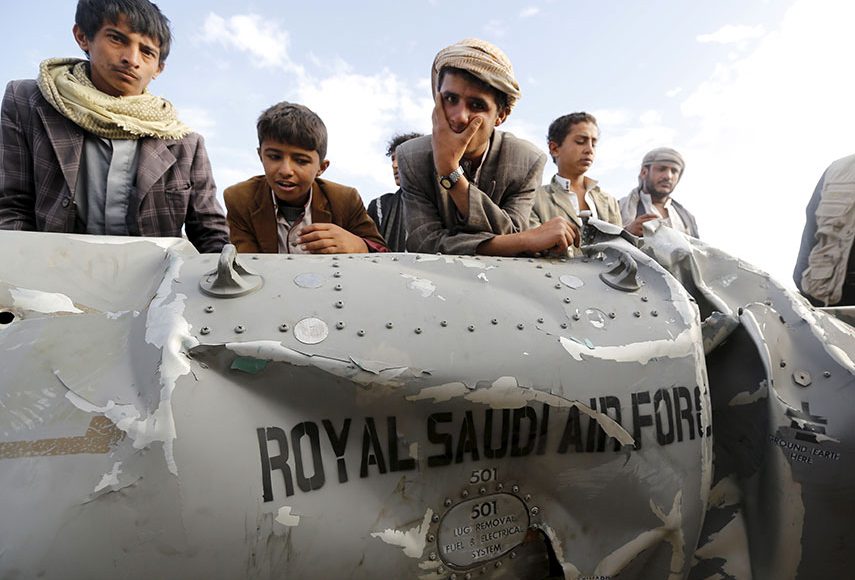 Yemeni journalist: “Saudi Arabia failed in Yemen despite US support”

Yemen has suffered through a violent war on its population by forces backed by Saudi Arabia for nearly seven years, during which 233,000 people have been killed, and has left the majority of the civilians’ dependent on aid, according to the UN. The Saudi-led Arab coalition, supported by the US government, is responsible for Yemen’s economic and humanitarian crises.

To understand what might be next for Yemen, Steven Sahiounie of MidEastDiscourse reached out to Yousra Abdulmalik who is a Yemeni journalist. She covers the war in Yemen for local Yemeni media.

Steven Sahiounie (SS): The administration of former President Trump supported the Saudi war on Yemen, and participated in it. What changes would you like to see in the new Biden administration’s Yemen foreign policy?

Yousra Abdulmalik (YA): Nothing. The history of the United States of America, which has not exceeded the 235 years since the end of the Independence War is full of huge numbers of wars that no country in the world has ever had before. According to documents and statistics, 93% of the life of the United States is the wars it waged against the world.

We find a clear absence in the strategy of the Americans in ending their wars. Often the wars fueled themselves and drained the Americans until they were forced to return to their countries, as happened in Korea, Vietnam, Iraq, and others.

For example, the Palestine issue, that nothing happened to it. The American faces inside the White House are changing, but that America’s hostile policy, especially towards the Arabs has not changed and will not change, no matter who the president is.

YA: The Biden administration has imposed a temporary freeze on U.S. arms sales to Saudi Arabia and is scrutinizing purchases by the United Arab Emirates as it reviews billions of dollars in weapons transactions approved by former President Trump, according to U.S. officials.

The war is only possible because Western countries — and the United States and Britain in particular – continue to arm Saudi Arabia and provide military, political and logistical support for the war. The Western powers are active participants and have the power to stop the world’s most acute humanitarian crisis.

With the beginning of the twenty-first century, the United States of America continued its bloody wars against the world and focused during this period on launching direct or proxy wars against the Middle East countries, under the pretext of fighting terrorism, especially after the September 11 events.

It has become clear to everyone, after 222 years of American aggression against the world, that this country is ready to violate the sovereignty of states and human rights in all countries that do not follow its orders. Here we are completing the decade and a half since the United States and its allies launched the so-called “War on Terrorism, “Washington has not yet been able to eliminate terrorist groups. On the contrary, its spread has increased and has not been able to achieve any change in Afghanistan. Until now, America has spent two trillion dollars since the 2001 attacks. The US economy is still bleeding because of this war.

On January 20, 2017, Donald Trump won the presidency, after his election campaign in which he promised to put an end to Saudi Arabia, which he said that its war on Yemen comes in light of its ambitions to control Yemen and plunder its wealth. Contrary to what he promised, Trump has given the US-Saudi aggression coalition the green light.

SS: President Biden recently lifted some sanctions off the Anti-Saudi resistance movement in Yemen, which allows humanitarian aid to flow into Yemen. Will this action have a role in breaking the siege that the Saudi regime enacted upon the Yemeni people?

YA: Biden just talked about reviewing the relations with Riyadh. Adding Ansarollah to the terror list will provide a legal justification and cover for

the Saudi crimes against Yemen. Once the name is added, it would not be an easy job to remove it.

“As noted by Secretary-designate [Anthony] Blinken, the State Department has initiated a review of Ansarullah’s terrorist designations,” the spokesperson said on Friday.

The US decision to designate the Ansarollah movement, which has been effectively the government of Yemen for the last five years, is aimed at justifying any form of aggression against Yemen. This is the way the US views the world.

America is also playing the terrorism card and trying to demonize everyone who does not accept the American tutelage and consider it a terrorist entity that must be fought and besieged economically and politically, as is the case with the resistance movements that America announced that it was placed on the terrorist regulations.

From another angle, the six-year inhumane siege represents Saudi Arabia’s last hope to bring Ansarollah to its knees.

The U.N. says 13.5 million Yemenis already face acute food insecurity, a figure that could rise to 16 million by June.

The United Nations and aid groups have warned “This designation comes at a time when famine is a very real threat to a country devastated by six years of conflict, and it must be revoked immediately. Any disruption to lifesaving aid operations and commercial imports of food, fuel, medicine, and other essential goods will put millions of lives at risk,” the aid groups said in a statement on Sunday.

Despite all these goals set by the Americans, the blacklisting remains largely symbolic and would not impact the movement’s position and power both on the political and war stages. In the past, Washington blacklisted other resistant movements like Lebanese Hezbollah and some units of the Iraqi Popular Mobilization Forces (PMF) to undermine them, but what is observable is the bold presence of Hezbollah and the PMF in home and regional developments.

SS: Do you perceive the recent acts by the Biden administration towards Yemen as being connected to a future Iranian nuclear deal?

YA: America has also turned now to new means, which is to impose economic sanctions on countries and entities that are not subject to the American will, as is happening with Iran, Syria, and other countries, even Russia and China.

The policy of the new US administration on Iran is very much the same as that of the Trump administration and that the only difference is in the rhetoric used.

The standard for changing the American behavior starts from lifting the embargo to stopping the many interventions they have carried out in Iran in the past and wish to continue.

SS: How do you see the future of Yemen? Could Yemen be possibly split into North and South states?

YA: The US terrorist designation appears to be a desperate attempt by the former US administration to step up pressure on Ansarollah, the popular Houthi movement, backed by the Yemeni armed forces and allied popular groups, after the Saudi regime failed to fulfill its objectives in Yemen after years of war, despite all the support it received from the US and other Western states.

The movement now has an upper hand both on the battleground and also the political ground over the aggression and its home and foreign backers, hence powerfully and smartly marring all plots designed by foreign sides. The Yemeni revolutionary forces step up their missile, drone, and sea strikes at Saudi economic arteries.

between the coalition’s paid fighters for influence as well as rape and murder crimes against women and children.

Buzzfeed website issued a report revealing that UAE hired American ex-soldiers to kill its political enemies in southern Yemen, while the Associated Press reported about secret prisons there to torture and sexually abuse Yemeni detainees on suspicion of belonging to Daesh and al-Qaeda. CNN also said in a report that Saudi and UAE “have used the US-manufactured weapons as a form of currency to buy the loyalties of militias or tribes, bolster chosen armed actors, and influence the complex political landscape,”. Above all, Southern Yemenis themselves, who accepted the coalition in the past, are holding protests, demanding the UAE and the coalition to leave their country.