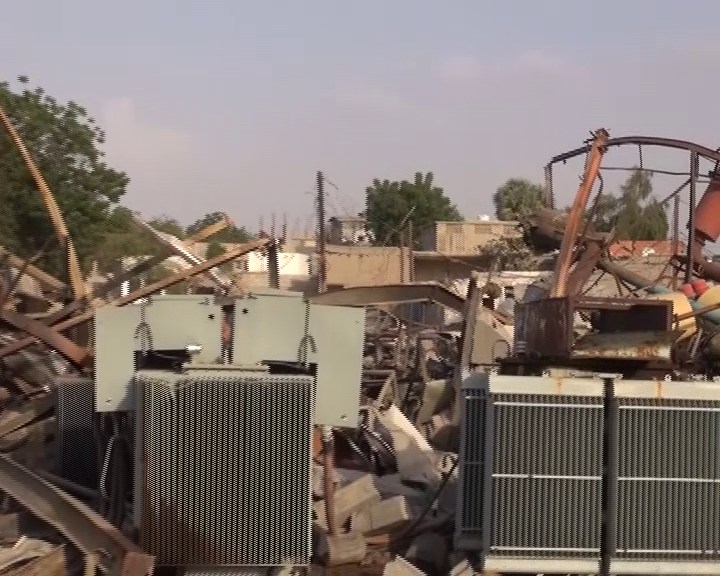 4 Billion ,464 million riyals are damages by the aggression on the electricity in Hajjah

The initial losses due to the US-Saudi aggression on the electricity sector in Hajjah Governorate amounted to 4,464 million and 741 thousand riyals.

A report issued by the Damage Survey Committee in the Governorate’s Electricity District stated that the cost of direct damages as a result of the aggression’s airstrikes amounted to one billion, 358 million and 185 thousand riyals.

According to the report, the direct damage includes the total destruction of the area’s assets, including power stations, warehouses and buildings belonging to a number of branches, as well as the high and low pressure electrical network, columns, transformers, distribution drums and wires.

The report indicated that the hysterical bombardment of the aggression coalition against Midi and Haradh branches caused great losses and the total destruction of the generation stations, buildings, network and stockpiles.

It pointed out that parts of the electricity network of Abs and Madinah branches were destroyed due to the aggression’s targeting of some sites adjacent to the network and sites in the city’s center, Mabeen and Sharis.

The report pointed out that the aggression targeted Bani Hassan transfer station in Abs district, which led to the destruction of more than 200 electrical transformers that were in the station’s stores, It also targeted the station’s control building and the battery stock section, while the main transformer was expsed to damages.

It mentioned that the cost of construction works is estimated at 406 million 556 thousand riyals.

The director of the Governorate’s Electricity District Branch, Eng. Ayoub Al-Bahri, confirmed that the aggression’s airstrikes on Hajjah governorate had led to a complete halt of the electricity service and resulted in many indirect damages, which caused the region losses estimated at two billion and 700 million riyals.

He pointed out that the indirect damages were represented in the cessation of activity in the region and its branches, especially the sale of the current, the collection of the debts of the subscribers. They also included the accumulation of obligations and fines, and the harm on four hundred employees in the region and the inability to pay their dues.

The naval engineer explained that the damages are not final, especially in light of the continued bombing and the inability to fully quantify the damage in Midi and Haradh.