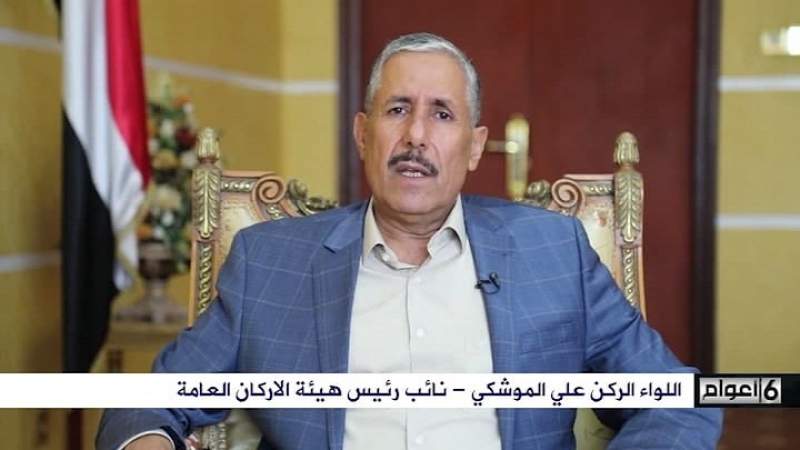 The army ,the committees are the stronger: Deputy Chief of Staff

Quting from al-masirah, Deputy Chief of the General Staff, Major General Ali Al-Mushki, confirmed that the fighters of the Army and Popular Committees now have the lead, determining the theater of operations.

“The military situation is excellent, we are moving steadily towards raising the readiness of the forces and securing all the military requirements from local manufacturing,” Al-Mushki said in an interview with Al-Masirah TV on Saturday evening.

He explained that Saudi Arabia and the countries of aggression entered the battle with arrogance due to their capabilities and plans, but they clashed with the steadfastness ofYemenis.

Regarding the battle of Marib, Al-Mushki pointed out that the battle is proceeding according to the plans drawn and the field performance is characterized by high professionalism and careful commitment to the established plans.

He revealed that there are many mercenaries in Marib who have been recruited to work with the takfiri groups, some of them have participated in Chechnya, Afghanistan and elsewhere.

Major General Al-Mushki also confirmed that “the military operations in Marib will reach their goals in the near future,” indicating that the forces of aggression made Marib a refuge for the takfiri groups and foreign forces.

“The US expressed its fear of the battle of Marib when we began to approach the strongholds of the takfiri groups associated with it. The continuation of the war is no longer in the interest of the forces of aggression, even at the level of material cost,” he added.

The top official also explained that the forces of aggression have depleted all kinds of weapons that they possess in the war, today they are politically and militarily powerless.

“The National team presented many initiatives to make the Stockholm Agreement succeed, but the other side did not take similar steps,” he said. “The United Nations involved itself with the forces of aggression in the war and did not take any measure to restrain the invaders and mercenaries in their violation of the Agreement.”

Major General Al-Mushki concluded his remarks stressing that “the path of retaliation to the aggression will continue to escalate. We will not accept that our people die by bombing and starvation, while we stand idly by.”

The Deputy Chief said that the battle of Marib is proceeding according to the plans drawn for it, and the field performance is characterized by high professionalism and meticulous commitment to the established plans.

He pointed out that the military operations in Marib will soon reach their goals, and that the people who have suffered from the arrogance of the takfiri groups will gain freedom.

He indicated that the military forces in Marib are led by foreign forces from Saudi Arabia, the UAE, and the takfiri groups. “The forces of aggression have made Marib a nest for takfiri groups and foreign forces, and have killed many of the position in Marib.”

Al-Mushki explained that there are many mercenaries in Marib who were recruited to work with the takfiri groups, and some of them had participation in Chechnya, Afghanistan and elsewhere. He stressed that the Americans expressed their fear of the battle of Marib, when the Army and the Popular Committees began to approach the strongholds of the takfiri groups associated with the US.