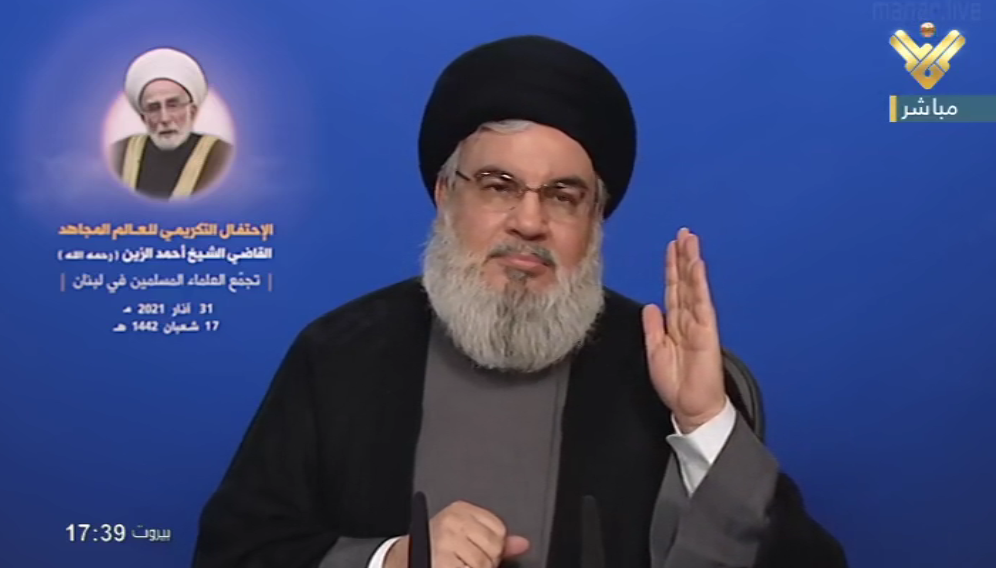 Secretary-General of the Lebanese Hezbollah, Sayyed Hassan Nasrallah, affirmed that Saudi Arabia’s announcement of an initiative to end the war on the Yemeni people is propaganda and great deception.

Nasrallah said in a televised speech on Wednesday that “what was offered to the Yemenis was deception and misleading, which aimed at a ceasefire with the continuation of the forms of war.”

He added, “There is a media and political war against the Yemeni army and popular committees in Yemen, by misrepresenting the scene that Saudi Arabia wants to stop the war and Ansar Allah Movement refuses.”

He stressed that the misleading media have tried to say that Movement refused to stop the war as a result of linking the issue of Yemen’s future with the Iranian nuclear file, and this is a great injustice and deception.

Nasrallah said, “A great deception is they tell the Yemenis to approve on a ceasefire, with the ongoing closure of the airport and ports, and nothing will enter Yemen, after that we go to political negotiations to solve the rest of the problems.”

He also emphasized that this great propaganda does not even affect the children of Yemen, addressing the Americans and Saudis by saying: “You are wasting time, while our brothers in Yemen are great in faith, resistance and jihad, as well as in politics and wisdom.

The cease-fire without lifting the siege means that the forces of aggression are trying to achieve what they have unable to militarily through social pressure, Nasrallah added.

He indicated that the forces of aggression are trying to push the Yemenis to negotiate under humanitarian pressure and the spread of epidemics and economic crises.

Sayyed Nasrallah addressed the Saudi leadership, saying: “I say to the Saudi government, do not waste your time, deception will not help, and you have to go to stop the war and lift the siege on the Yemeni people.”