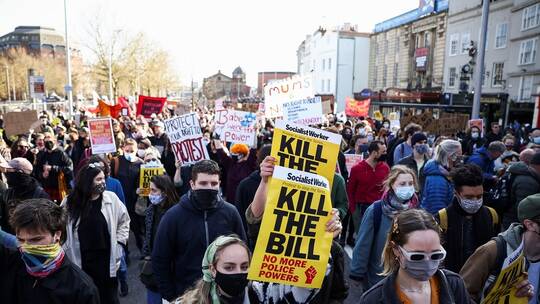 Thousands of demonstrators joined rallies across Britain on Saturday against a proposed law that would give police extra powers to curb protests, with some scuffles breaking out following a march in London.

The Police, Crime, Sentencing and Courts bill aims to toughen measures officers can take to disperse demonstrations, such as imposing time and noise limits, which campaigners and activists fear would be used to curb dissent.

“Kill the bill” marches were held in dozens of towns and cities, supported by big campaign groups such as climate change campaigners Extinction Rebellion and the Black Lives Matter movement.

The new bill follows action by Extinction Rebellion which paralysed parts of London in early 2019 and fuelled calls from some politicians for the police to be given tougher powers to prevent excessive disruption.

Since the proposed law was brought before parliament last month, there have been sporadic demonstrations across the country, with Saturday’s rallies being part of what organisers said was a national weekend of action.

Over 1,400 crimes recorded in occupied southern provinces during 3 months

Moscow Warns of ‘Consequences’ as US Slaps New Sanctions on Russia Targeting Debt,…