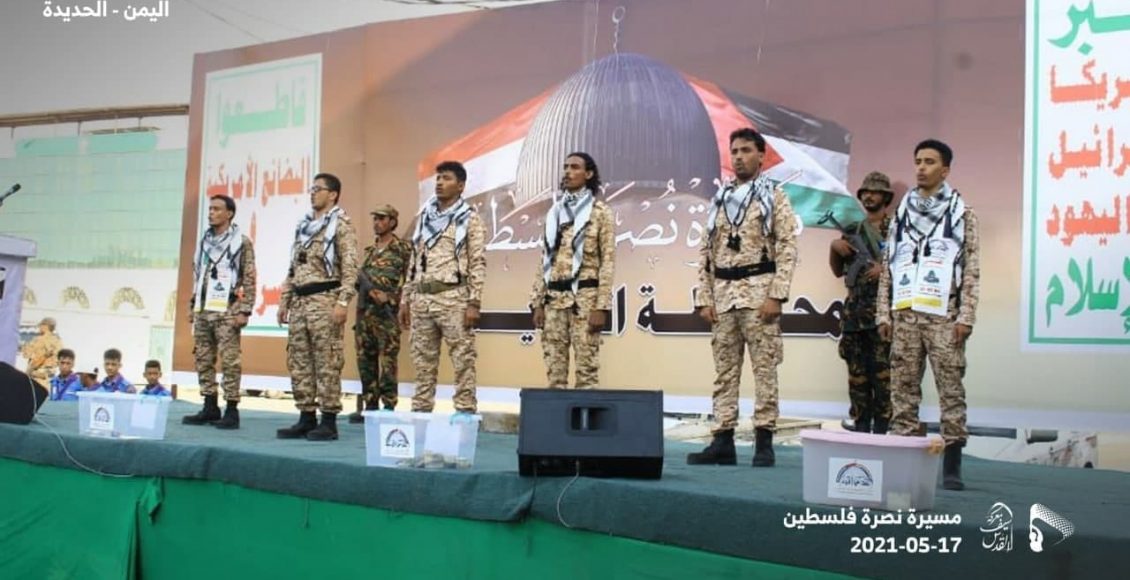 The capital, Sanaa, and 13 other Yemeni governorates (out of a total of 22 governorates), on Monday, May 17, 2021, witnessed major mass rallies in support of the Palestinian people and their valiant resistance.

Thousands of Yemeni people gathered in the capital and the governorates of Sanaa, Saada, Hodeidah, Hajjah, Marib, Al-Jawf, Dhamar, Amran, Taiz, Al-Dhale ‘, Al-Bayda, Al-Mahwit, and Rayma (these governorates include most of the population of the Republic of Yemen) in order to support the Palestinian cause.

As usual, the capital, Sanaa, was filled with hundreds of thousands of supporters of the Palestinian cause, who poured into Bab al-Yemen Square this afternoon, and their crowds covered Al-Zubairi Street from the eastern side. Sanctities and the necessity of practical and effective action in support of the Palestinian people as a religious and moral responsibility.

During the march, which was attended by representatives of the Islamic Resistance movements, Jihad, Hamas, the Popular Front and a large number of political and social figures, a member of the Supreme Political Council, Muhammad Ali Al-Houthi, gave a speech ,in which he expressed his surprise at its beginning, of the contradictions of some Arab regimes, led by Saudi Arabia and the Emirates. They committed the killing of the Yemeni people for more than Six years for the fugitive ,Hadi, while they did not provide any support for Jerusalem.

Al-Houthi made an offer to Saudi Arabia and the UAE that the fighting on all Yemeni fronts, including Ma’rib front, would cease, provided that those countries would devote all the support and capabilities they provide to support the fighting on those fronts to Palestine and the liberation of Jerusalem.He also asked them to move their warplanes that bomb the Yemenis on a daily basis to Palestine, in order to strike the right place instead of Yemen.

He stressed that the Yemeni army’s missile force and air force are ready to work with Saudi Arabia and the UAE in the battle with the Israeli enemy by choosing a jihadist battle .He explained that Saudi Arabia and the UAE, as they mobilized for the aggression against Yemen, on various arenas and media,must do so the same with Palestine.

Al-Houthi referred to the steadfastness of the heroes in Palestine, stressing that the deal of the century had collapsed in front of the Palestinians.

He said: The Palestinian issue is one issue and cannot be divided, explaining that the sons of Palestine stand in the first trench, defending the nation, stressing at the same time that Yemen is present at all times and whenever to support the Palestinian factions and the resistance against the Israeli enemy that attacked Al-Aqsa Mosque and Jerusalem.

For their parts , participants in Sana’a and the other governates chanted slogans denouncing the barbaric attacks against the Palestinian people by the Zionist enemy forces.

Yemeni officials praised the interaction of the people of the provinces and their great presence, indicating that Palestine will remain the central and first issue of the Yemeni people and the nation .They called on Arab and Islamic peoples to boycott American and Zionist goods in response to the crimes of the Zionist entity against Palestine and Islamic peoples.

They also , in their speeches, touched the position of the Noble Qur’an in confronting the Jews and the Christians … referring to the three imperatives that were mentioned in Allah’s Book ,defeating the Jews, losing their loyalists, and the victory of the believers who follow the guidance of Allah Almighty.

They called for interaction and continuation of the donation campaign called for by the Leader of the Revolution to support the Palestinian people and their valiant resistance.