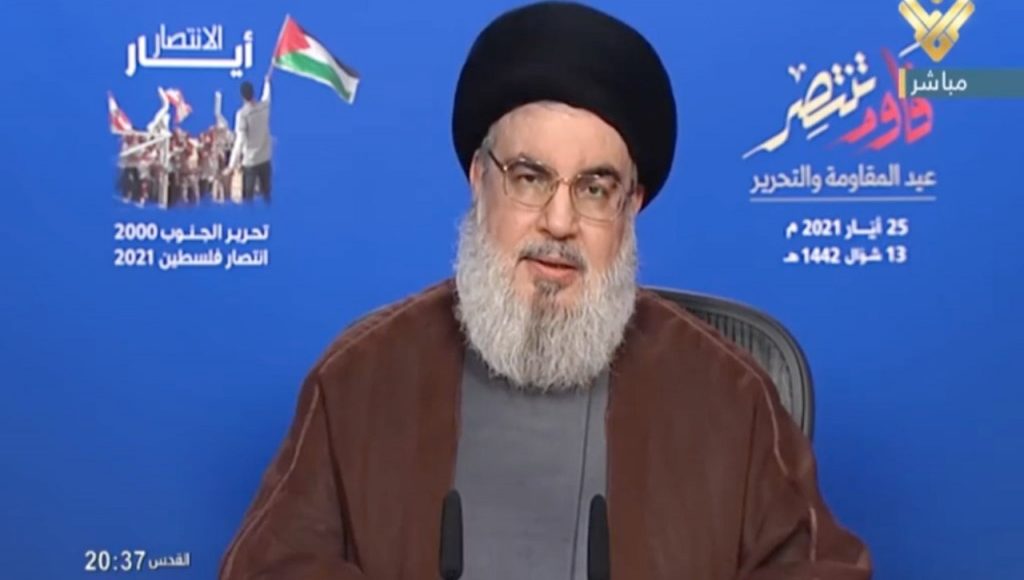 Hezbollah Secretary General Sayyed Hasan Nasrallah delivered a speech Tuesday on the anniversary of the Resistance and Liberation Day in which he congratulated the Palestinian resistance for its great victory.

“We are now celebrating two great victories, the 25th of May 2000 in Lebanon and the 21st of May 2021 in Gaza,” Sayyed Nasrallah initiated, saluting the bravery of the Palestinian resistance in the latest battle.

His eminence considered that “the liberation that the Lebanese people attained in 2000 was dedicated to Palestine because it is where our goal lies, and this victory shifted the strategic path of the Palestinian cause and the conflict with the enemy.”

As he remembered the martyrs who fell on this path and reminded of the great role that Hajj Qassem Suleimani played in supporting the resistance, Sayyed Nasrallah praised the “historic stance” of the Palestinian resistance in standing up for Sheikh Jarrah neighborhood violations, assuring that “the displacement taking place in Sheikh Jarrah is not a normal development considering the symbolism of this neighborhood. It is a step forward in Judaizing Al-Quds”.

“The Palestinian resistance took a firm and historic decision after witnessing the violations that the occupation practiced in Sheikh Jarrah neighborhood, and the cause of this battle was the arrogance and stupidity of the enemy as well as its miscalculations and underestimation of the resistance,” he said, adding that “despite all that is taking place in Palestine, some Arab countries are still normalizing and working on improving the Israeli entity’s image”.

Sayyed Nasrallah pointed out that “the Israelis assumed that the Judaization procedures in Al-Quds will only be faced with statements and denunciations. They didn’t expect that the resistance will take this historic decision.”

“Gaza surprised the friend and enemy with its threat in defense of Al-Quds… This historic development in “Al-Quds Sword” must be highly appreciated as Gaza has engaged in this battle not to protect itself or its own people but to protect Al-Quds,” he added.

Hezbollah SG asserted that “The Gazan people were ready to defend and sacrifice themselves for Al-Quds, Al-Aqsa mosque and the nation’s sanctities,” addressing the Israeli enemy “you should be aware that violating Al-Quds and Al-Aqsa mosque in unlike any other violation you practice.”

“The enemy’s leadership must repeat its calculations after the war on Gaza… and any violation to Al-Aqsa or Islamic sanctities in general must not be faced by the resistance in Gaza only. The equation must be a regional war for Al-Quds,” his eminence warned, stressing that “when Islamic and Christian sanctities face threats there won’t be any red lines.”

“In the latest battle the whole world felt it was standing in front of a united Palestinian people that moved in one direction toward one goal. Al-Quds Sword revived the Palestinian cause around the world and imposed it on social media. It revived the culture and spirit of resistance as an only path to liberate the land,” he further stated.

Moreover, Sayyed Nasrallah considered that “Al-Quds Sword” battle hit hard the normalization path as well as the normalizing countries and their media.

“After this battle we can say that the “deal of the century” had fallen bringing out the unity of the Palestinian people inside the occupied territories and reminding the world of Israel’s ugly face being an apartheid which kills innocent people and commits massacres. It further re-pointed the conflict compass towards the real enemy,” he said.

Listing the great achievements of “Al-Quds Sword” battle, Sayyed Nasrallah also stated that “it paralyzed the security of the Zionist entity and disfigured its image as a safe entity for businesses and investors. It imposed a confrontation between the occupation and the Palestinians inside the lands of 1948, which Israel considered an existential threat. The Israeli entity failed to prevent the launch of missiles in their announced timing, which is considered a data and intelligence failure,” adding to the list that Israel had failed to destroy the unlaunched missile supply in Gaza.

His eminence reassured that “the latest battle revived historic Palestine from the sea to the river and reflected a rise of faith in the choice of resistance.”

He further considered that “the last 10 years were the hardest on our region, but the steadfastness of the resistance axis in the region has been a major defense and uplift for the victory of Palestine.”

In this context, his eminence clarified that “Israel is unlike any other state because it is an “established state” not a “normally existing one”, this is why security is basic for its existence… because when the Israeli people feel insecure in the entire Palestinian land, the simplest thing for them to do is pack and leave.”

“If the Iron Dome was a success Netanyahu would have bragged about it and marketed it everywhere,” he added.

On Lebanon, Hezbollah SG considered that the resistance has never been any stronger in terms of power, number, expertise, readiness, preparation, faith, courage and morale.

As he warned the occupation of any miscalculation in Lebanon, he considered that “Lebanon is strong with its presidency and with the equation it enforced that is “army, people and resistance”.

His eminence further re-offered his condolences to the family of Mohammad Tahhan, the 21-year-old Lebanese protestor who was killed by the Israeli Army on the southern Lebanese borders, warning the Israeli enemy that “his name was added to the list… we will be patient but we will not disregard this bloodshed”.

In conclusion, Sayyed Nasrallah assured that Al-Quds is closer and the end of the Israeli entity is closer, saluting the stance of the Yemeni people in solidarity with Palestine.

“It brings tears to my eyes when I see the solidarity of the Yemeni people and their leader Sayyed Abdul Malak Al-Huthi who addressed the Palestinians saying “we are ready to share our bread with you”.”

Sayyed Nasrallah asked “do you even have bread to share with the Palestinian people?”

Sayyed Abdulmalik: Ready to Share Life Necessities, Bread with Our Brothers in Palestine

Air strikes on Marib ,Saada, and 120 violations recorded in Hodeidah