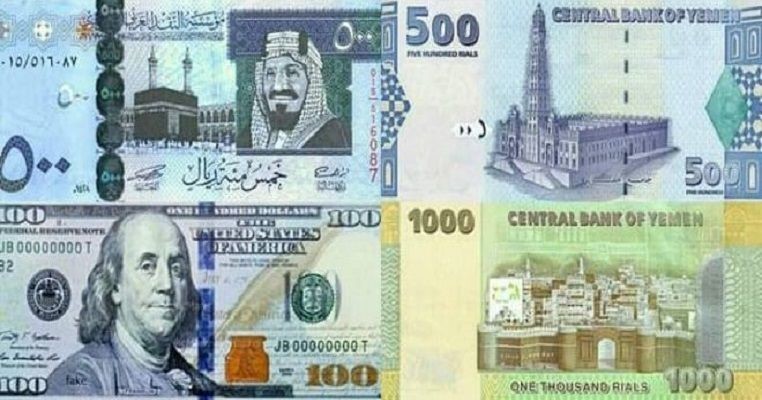 The economic policies pursued by the political leadership and the National Salvation Government have resulted in achieving relative stability of the national currency exchange rate in the free governorates, and putting an end to the continuous collapse that riyal has witnessed since 2016, as a result of the economic war waged by the US-Saudi aggression coalition on Yemen.

The decision taken by the Central Bank at the end of 2019, regarding banning dealing with or possessing illegal currency denominations, was a wise decision that the Yemeni people are still benefiting from it until today, due to the stability of the exchange rates in recent years compared to the state of the economic collapse in the occupied governorates.

On the other hand, because of the continued circulation of illegal currency, the mercenary governments suffered a complete failure in managing the economic and service affairs, causing the value of the illegal currency circulating in the occupied governorates to collapse against the dollar and other foreign currencies by nearly 400 percent.

In this context, the illegal currency continues to collapse, approaching 1,000-riyal barrier against the dollar, and heralding additional economic and humanitarian crises that threaten the lives of citizens in the occupied governorates.

The price of the dollar in trading recently in Aden and other occupied governorates reached 920 riyals for sale, while the exchange rate of the Saudi riyal reached 241 riyals.

The recent collapse of the currency was met with popular discontent in Aden and other occupied governorates, after the street realized the danger of the continuation of the economic war waged by the aggression and its mercenaries against the Yemeni people, which primarily targets the livelihood of citizens.

The stability of exchange rates in the free governorates would not have lasted without the continuation of the concerned agencies in Sana’a, represented by the Central Bank, by pursuing deliberate monetary policies. They prevented the banking market from being dumped with the printed currency illegally, as well as their continued tightening of control over moneychangers and preventing currency speculation as is happening in the occupied territories.

The new collapse of the illegal currency comes because of the mercenary government printing more currency. The printed money containers continue to arrive successively at the ports under the control of the aggression coalition, causing the market to be flooded with cash and causing a new collapse of the riyal against the dollar.

What forced the mercenary government to print the currency is the worsening of its financial situation and its inability to pay the salaries of employees in the occupied governorates because of the corruption that permeates its corridors and the continuation of its officials plundering oil and gas revenues, ports and outlets and other public revenues.

Informed sources confirm that the mercenaries’ central bank in Aden is facing a severe liquidity crisis because of its continued implementation of overdraft operations with a number of government and commercial institutions.

Since the aggression and its mercenaries moved the functions of the central bank to Aden, the latter has been unable to manage the exchange rate, but has even contributed to the deterioration of the currency value, due to its continued financing the mercenary government’s expenses through cash issuance without a cover from international reserves.

Economists warn of the consequences of these destructive practices and policies for the Yemeni economy, in light of the inability of the mercenary government and its bank to stabilize exchange rates, and put an end to the continuous collapse of the currency and their abject failure to control the exchange market in the occupied governorates.

They pointed out that the continued deterioration of the currency value will have serious effects on the purchasing power of the riyal, and the deterioration of the standard of living of citizens, especially in the occupied areas. In addition, it will results in effects on the financial position of the country’s banking system and the erosion of the wealth of individuals and companies that exist in the form of cash balances in the local currency. They confirmed that the constant of the aggression and the financial division resulting from the transfer of central bank functions will lead to a deterioration in the value of the currency, and the exchange rate in the occupied governorates may rise to record levels in the near future.

These developments come while the mercenary government is still rejecting the proposed solutions regarding the reunification of the financial system and the central bank and the supply of all the country’s oil, gas and other revenues to it so that it can organize the banking market and pay the salaries of all state employees. It is a proposal that the National Salvation Government had previously submitted more than once during in recent years, but it was rejected by the countries of the coalition of aggression and the mercenary government.

Two citizens injured in Saudi bombing of Munabbih in Saada