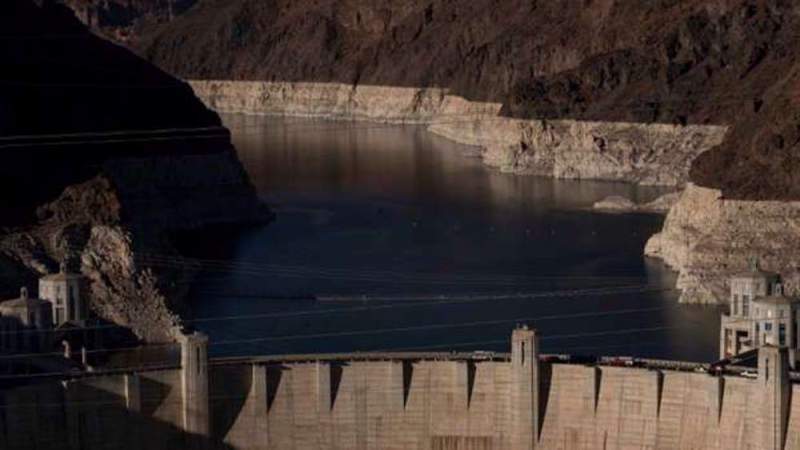 Lakes at historically low levels, unusually early forest fires, restrictions on water use and now a potentially record heat wave: even before summer’s start the US West is suffering the effects of chronic drought made worse by climate change.

Eighty-eight percent of the West was in a state of drought this week, including the entire states of California, Oregon, Utah and Nevada, according to official data.

In a particularly stark symptom of this trend, which is affecting more than 143 million Americans, Lake Mead — the country’s largest reservoir, lying at the border of Nevada and Arizona — now stands at its lowest level since its creation in the 1930s.

The lake, formed when the massive Hoover Dam was built across the Colorado River not far from Las Vegas, stands at just 36 percent of capacity, below even a record set in 2016.

Authorities expected something like this — but not until August.

The situation in northern California, which normally receives ample precipitation in the winter and spring, is no better. Lake Oroville, the state’s second largest reservoir and a key part of a network providing potable water to 27 million Californians, is 165 feet (50 meters) lower than in 2019.

Widespread water-use restrictions appear inevitable over the coming months, with potentially serious ramifications for Western states, in particular for irrigation-dependent farmers — who provide much of the country’s fruits and vegetables.

In California, whose vast almond groves supply 80 percent of world production, some farmers have already begun uprooting trees to save water.

As of April 1, the date traditionally marking the area’s last snowfall, the snowpack on the upper slopes of the Sierra Nevada — source of roughly a third of all water used in California — was at only 60 percent of average.

“Really, one thing unique this year is that as snow melted, the runoff ended up soaking into dry soils and ended up evaporating,” never reaching Lake Oroville, John Yarbrough, an official with the California Department of Water Resources, told AFP.

“So that’s what was unusual this year, how little runoff we got from that snowpack.”

According to the US Drought Monitor, one third of California is currently experiencing “exceptional drought,” the worst level.

And dry soils and water-deprived vegetation create the conditions for even higher temperatures, feeding a devastating vicious circle.

Not surprisingly, the southwestern US is bracing for an extreme heat wave this coming week, with temperatures some 20 degrees Fahrenheit (11 Celsius) higher than seasonal norms and with highs of up to 120 Fahrenheit expected in some spots.

Meteorologists have issued heat warnings, saying that Las Vegas, for example, could hit 115 Fahrenheit, surpassing a record established in 1940.

Such conditions are “rare, dangerous and deadly,” said the National Weather Service bureau in Phoenix, Arizona — where the thermometer is expected to hit 118 degrees on Friday.

Authorities are particularly concerned about forest fires, which have arrived unusually early this year and with rare intensity. As of the end of May, fires in California had already destroyed five times as much vegetation as they had last year at this point.

Most experts say that even if drought is an expected part of life in the Southwest, the situation has clearly been worsened by climate change.

A study published last year in the journal Science estimated that human-caused climate change worsened the impact of drought by 46 percent from 2000 to 2018.

“We’re already living in a new climate, that is a different climate than when many of our systems were designed and built 50 or 100 years ago,” Noah Diffenbaugh, a climatologist with Stanford University, told AFP.

“And it’s a climate in which these water deficits primarily result from the influence of warming temperature.”

He said he believes the risks presented by climate change can still be managed.

But to do so, he said, it is vital “to not just catch up with the climate change that’s already happened, but to leapfrog ahead.”

Palestinian factions call for a “mobilization” on Tuesday, and Hamas announces a general mobilization