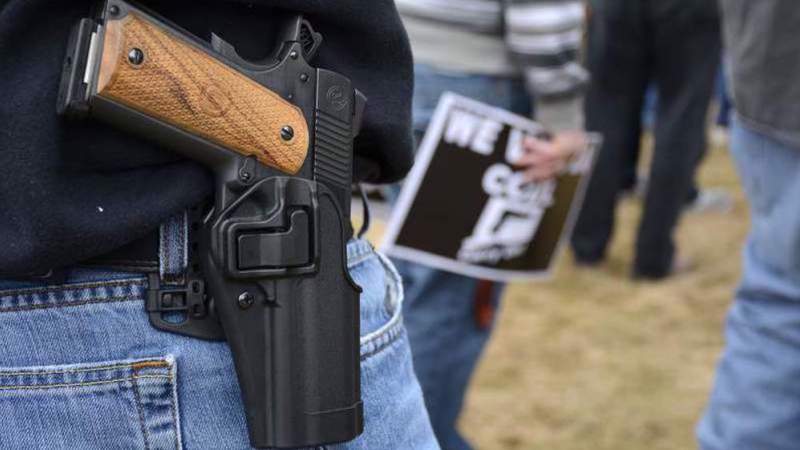 A chorus of opposition to a new law allowing people in Texas to possess and carry firearms in public without a permit has gathered more voices, with a Democratic Congresswoman saying Governor Greg Abbott “has chosen to betray the victims of gun violence.”

Abbott signed into law Wednesday the controversial ‘constitutional carry’ bill that scraps most of Texas’s permit requirements and permits the residents of the conservative US state to carry handguns with no license or mandatory training, the latest in a series of measures expanding gun rights in such US states.

US Representative from Texas Veronica Escobar said in a tweet Wednesday that, “Despite overwhelming support for gun violence prevention legislation, Republicans, led by a cowardly governor, are more interested in groveling for the gun lobby’s attention than they are in preventing gun violence and honoring victims and survivors in El Paso and across Texas.”

All state residents aged 21 and up will be free to tote handguns, openly or concealed, once the legislation takes effect on September 1.

HB 1927 argues that both the United States and Texas constitutions allow citizens to bear arms and that therefore there should be fewer barriers to being able to carry such weapons.

Abbott previously indicated he would sign the bill if it passed the state’s legislative houses.

“This is something that 20 other US states have adopted and it’s time for Texas to adopt it, too,” Abbott said in April.

But opponents, including state and national Democrats, say more lenient rules on guns could lead to more violence.

They cited mass shootings in the state’s capital Austin last week that left one person dead and 13 injured and a 2019 gun massacre at a Walmart in El Paso in which 23 people were killed.

State Representative Vikki Goodwin had asked Abbott on Monday to veto the bill after the shooting in Austin.

“We cannot ignore the pattern of gun violence that we have seen again and again…We must intervene to break this cycle,” she said in a statement, arguing that gun laws “impose boundaries, create order and set a tone” in addressing gun violence.

The bill passed both the state House and Senate despite d opposition from police groups, gun control advocates and even the public at large, with a recent poll showing some 59% of Texans surveyed are opposed to permitless carry.

A group of five law enforcement groups led by the Dallas Police Association lobbied strongly against the bill, though ultimately compromised after state Senators included a number of amendments to the law to address their concerns, which centered on safety.

The groups had said “many dangerous and unstable Texans will have unfettered access to weapons and face little or no punishment when apprehended.”

With about 121 firearms in circulation for every 100 residents, the US is by far the most heavily armed society in the world, according to the Geneva-based Small Arms Survey, a research group.

The Second Amendment of the US Constitution enshrines the “right to bear arms,” which the country’s apex court says allows individuals to keep handguns at home for self-defense.

The free access to guns and little control over them has paved the way for a spree of mass shootings in the US in recent years, promoting global concerns.

In April, US President Joe Biden called for end to “epidemic” of gun violence in the US, urging Congress to reimpose a 1994 ban on “assault weapons” and high-capacity magazines.

“We need more Senate Republicans to join with the overwhelming majority of their Democratic colleagues, and close loopholes and require background checks to purchase a gun,” Biden said.