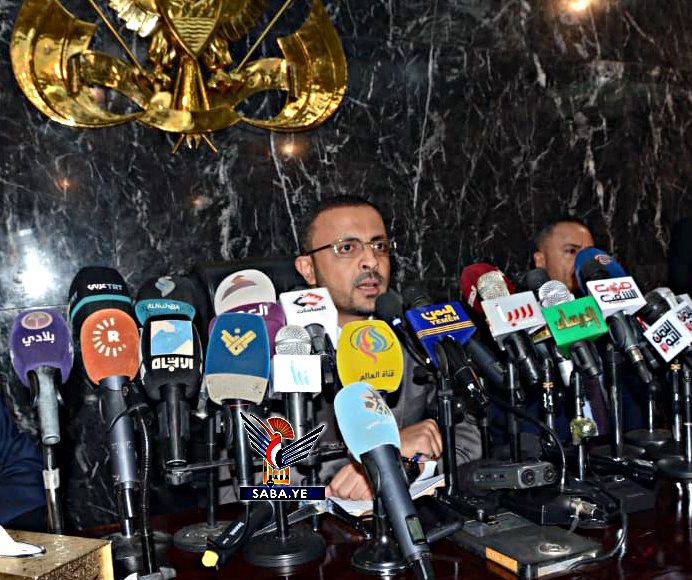 The Governor of the Central Bank of Yemen, Hashem Ismail, revealed that the illegal printing of currency by the countries of aggression and mercenaries amounted to five trillion and 320 billion riyals until June 2021 AD, which is three times what the Central Bank printed in Sana’a from 1964 AD to 2014.

The Governor of the Central Bank stated in a press conference today in Sana’a that the contracts announced until the end of 2021 amounted to one trillion and 720 billion riyals.All these amounts reached the so-called Bank of Aden in separate installments during 2017, 2018, and 2019 AD.

He pointed out that the Bank of Aden signed a secret contract, which has not been disclosed until now, which is amount to two trillion riyals of the category of (5000) in 2017.The traitors are still planning how to issue this amount and pump it to the market, in addition to signing a new contract with the amount of 600 billion riyals in 2019 AD. All these amounts reached the Bank of Aden in separate installments during 2019, 2020 and 2021 AD.

Hashem Ismail stressed that all economic sectors were subject to direct targeting, as the enemy looted revenues and wealth, while at the same time depriving state employees, retirees and students on scholarships to study abroad , in addition to social security allocations and others.

With regard to the banking sector, the Central Bank Governor affirmed that the American enemy supervised the conspiracy scheme against this sector and followed up the implementation. He mentioned the threat by the American ambassador to the national delegation in the Kuwait negotiations at the beginning of 2016 AD, a few months before the decision ,to transfer the main center of the Central Bank, and to make the national currency not worth The value of the ink it was printed with.

He pointed out that the conspiracy against the banking sector began with the issuance of a decision to transfer the functions of the Central Bank to Aden in a grave legal and constitutional violation.He indicated that the Central Bank in Sana’a was managing monetary policy in all governorates of the Republic, and was keen to disburse the salaries of state employees, including traitors participating in the aggression.

He stated that the aggression seized the external reserves of foreign exchange, which amounted to nearly one billion dollars at the time, and piracy on the powers of the system of transfers and exchange of information between international banks, the so-called “Swift”.It also participated with the side of the traitors’ government in looting the revenues of crude oil, estimated at More than six billion dollars,which were deposited in special accounts in the National Bank of Saudi Arabia.

He pointed out that the Central Bank of Aden put financial burdens on the Yemeni people in the occupied governorates by collecting amounts under what was heard of deposits and loans and looting them in banking practices through which it practiced extensive money laundering and terrorist financing operations, where these funds amounted to more than two billion dollars.He noted that the bank in Aden facilitated the seizure of the external balances of the Agricultural Cooperative Credit Bank and the hacking of the bank’s global remittance system.

The Governor of the Central Bank stressed that the aggression and its mercenaries took control of one of the most important monetary policy, which is the currency printing tool, which is the most dangerous conspiracy.It harms every Yemeni citizen according to a deliberate scheme to destroy the national currency.

He stressed that the Central Bank in Sana’a will not hesitate through its position at the forefront of the economic front and will follow up on developments and take what is necessary in their regard.

He called on everyone to stand by the Central Bank to preserve the national currency with popular and societal awareness.. He called on public and private institutions and components to realize and absorb the scale of the advanced stage of economic aggression and for everyone to contribute to thwart any schemes and take what is necessary to enhance general economic resilience.

The Governor of the Central Bank urged the media, scholars and academics to continue raising awareness and standing by the bank and the competent authorities to implement the necessary decisions and steps to protect the national economy.

He called on citizens in the occupied governorates, merchants, and businessmen, to do their duty and preserve what remained of their money, savings and economy, by stopping dealing with any new publications of the currency in order to preserve their sources of livelihood.

He reiterated the readiness of the Central Bank of Yemen in Sana’a for any serious steps to protect the national economy at the level of the Republic of Yemen, to alleviate the suffering of the Yemeni people.He pointed out that the Central Bank in Sana’a will maintain price stability in the free governorates.