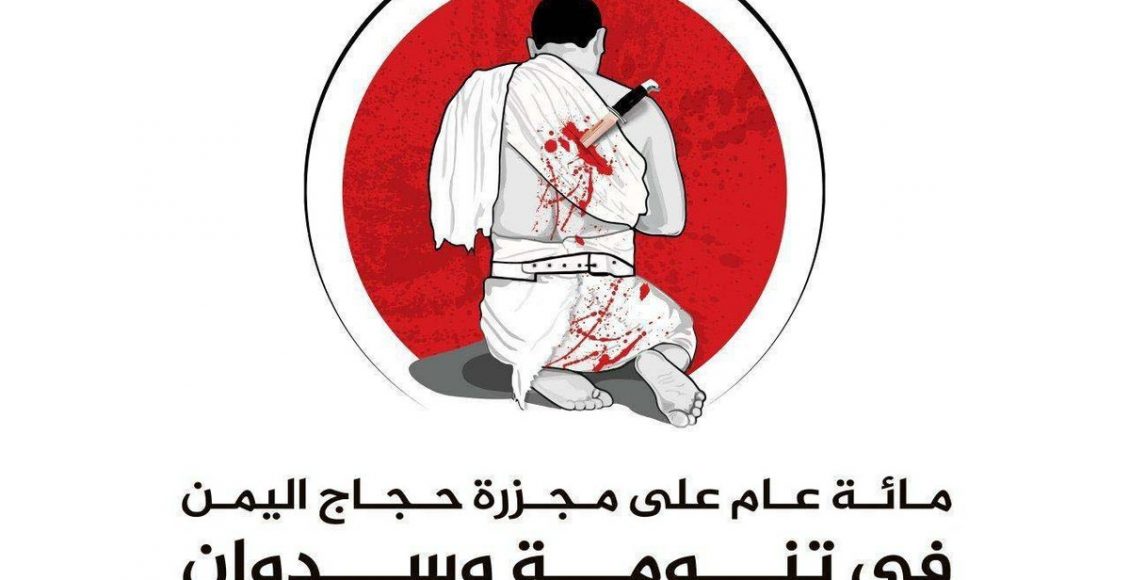 The place: Tanomah area in Asir, then in Sadwan, after pursuing the survivors from Tanomah.

Executor: The Saudi regime and the Takfiri Wahhabi Brotherhood.

The attempt of Saudi King Abdul Aziz to intimidate the Yemenis to extend his full control over Asir region, which was an integral part of Yemen.

The takfiri Wahhabi doctrine of AL Saud, which expiates everyone who disagrees with it, permits his blood, and even takes pride in killing him, as a large number of the massacre’s martyrs were slaughtered

Al Saud army was greedy for the belongings of the pilgrims’ caravan, which contained money, supplies and merchandise that they were selling during the Hajj season to benefit from them and cover the costs of Hajj trip.

The number of martyrs: more than 3000 unarmed pilgrims, men and women, elderly and infirm, across the social and spatial spectrum in Yemen, and almost every house in Yemen has a martyr in that massacre.

The number of survivors: Five hundred Yemeni pilgrims, including some women. They took advantage of the shooting situation and escaped on their own. They were the ones who reported this massacre and transmitted many of its painful details.

The value of the looted goods, money and property that were in the possession of Yemeni pilgrims were estimated at (400,000) French Marie Theresa riyals, which is equivalent to approximately two billion Yemeni riyals.

Legal and legal description of the crime:

Legal characterization: This heinous crime is considered among the crimes of war with its three pillars combined: intimidation of the road, theft and murder.

Legal description: This massacre is one of the largest war crimes against humanity and among the crimes of genocide, according to impartial reports of international organizations.

Yemeni official: The Yemeni people will pursue the occupying countries and mercenaries locally and internationally over all their crimes

25 Air raids on Marib ,Najran, and 104 violations recorded in Hodeidah