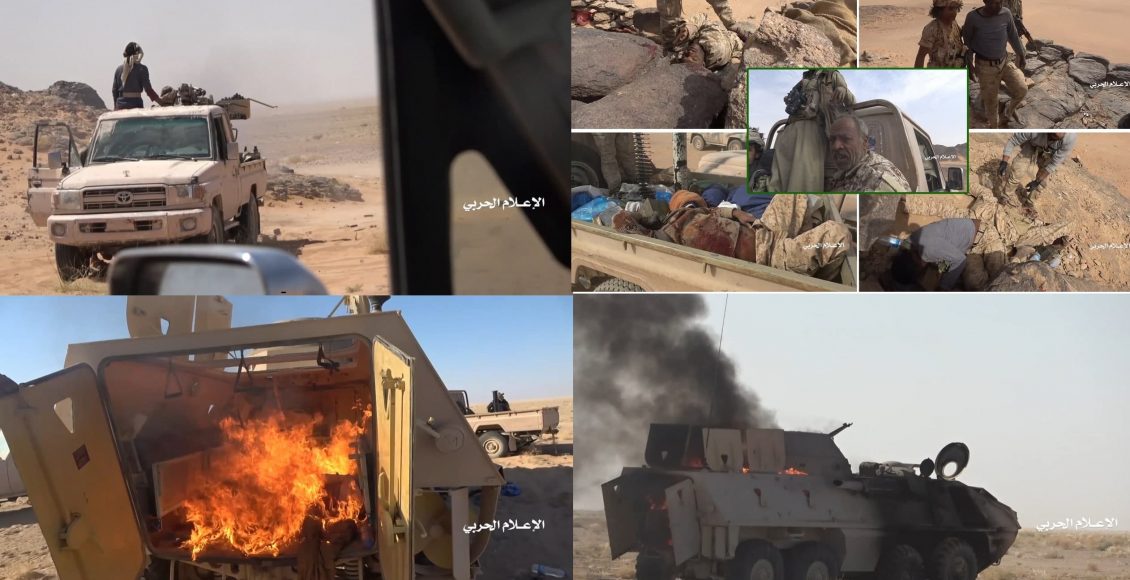 The broad offensive operation was launched from five tracks, which ended – with God’s grace and support – with the liberation of the entire Al-Duhaydah mountain range and its surroundings, the lifting of the siege on the Yemeni army and popular committees and the recovery of the body of the martyr Hani Mohsen Salah Arawi Tomer “Abu Fadel”.

They began the operation by targeting the gatherings and fortifications of the mercenaries of the Saudi-American aggression, and the scenes showed the progress of them from the drawn paths, showing the mercenaries’ gatherings and sites being targeted by artillerymen who inflicted losses on the enemy forces.

The scenes showed direct contact with the mercenaries’ vehicles and armored vehicles, inflicting losses on them.

They managed to break the advance of the mercenaries of aggression, in which they tried to restore the areas liberated by them, but their double losses forced them to flee.

The scenes showed the armored vehicle belonging to the martyr “Abu Fadel Tomer”, explaining that the vehicle was subjected to a barrage of mercenary fire, with the effects of bullets appearing on it.

The scenes showed the great losses suffered by the mercenaries of the Saudi-American aggression, and their equipment – thanks to God – was destroyed and burned at the hands of the army and the popular committees, where more than 50 vehicles were destroyed and burned during the operation , and various weapons were seized.

The operation – by the grace of God – ended with the liberation of the entire Al-Duhaydah mountain range and its surroundings, lifting the siege on them and restoring the body of the martyr Hani Mohsen Salah Arawi Tomer “Abu Fadel”.

The operation was with the main participation of the tribesmen of Al-Jawf governorate, who insist on liberating their country from the remnants of the mercenaries of the aggression and its followers, advancing the ranks of the army and the popular committees in the operation.

The control of the liberated areas is of great importance as it is the last mountain range overlooking a wide desert area east of Al-Jawf and its proximity to the oil fields in Safer in Marib, as well as its proximity to the line linking the center of Marib governorate and al-Wadi’a border port.

The military media released, the day before yesterday, Friday, heroic scenes of one of the Yemeni army and popular committees while rescuing his wounded brothers who were trapped in one of the military sites in Al-Maraziq front in Al-Jawf.

The scenes documented the heroic operation carried out by the martyred Abu Fadel Tomer during his attempt to break the siege on his fellow from the army and popular committees in Al-Dhaiza in Maraziq front and to take the wounded to safe places, where the road was surrounded by enemy fire from all sides, but the martyr Abu Fadel insisted on removing the wounded .

The first attempt in which the martyr Abu Fadel used a military armored vehicle that enabled him to reach the besieged ones and provide them with equipment and take their wounded. During the return with the wounded, the armored vehicle was damaged, but Abu Fadel was able to take it to a safe place.

Abu Fadel continued the process of exhuming the wounded, independent the second time of an ordinary military crew and was able to pass the enemy’s fire to reach the wounded and during the return the enemy bullets rained down on him, but the insistence of the martyr led to the arrival of the wounded to safe places despite the enemy’s ability to damage the military one.

On the third time, the martyr Abu Fadel got into another car to continue the operation of rescuing the wounded, and as soon as he reached close to them, the enemy’s fire hit his car, but the martyr Abu Fadel got off and continued walking wounded, but the enemy’s fire fell on him from all sides to hit him , then he rose as a dear martyr after he made the greatest epics line in sacrifice and determination.

25 Air raids on Marib ,Najran, and 104 violations recorded in Hodeidah