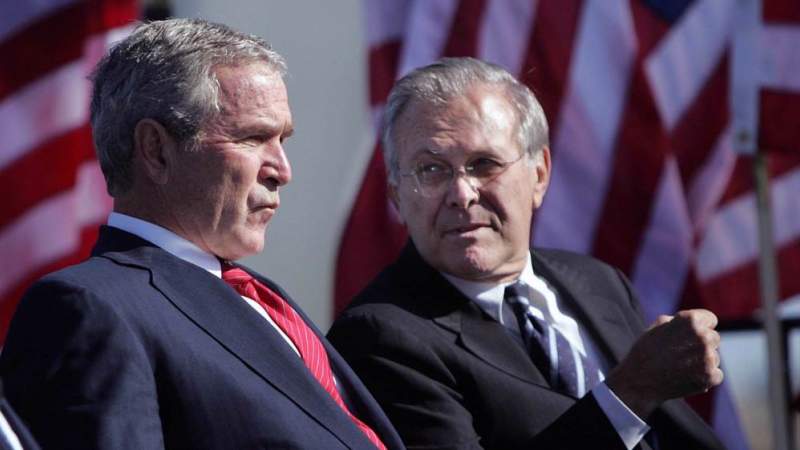 ‘Cheerleader for Torture and Abuse’: US Reacts to Ex-Pentagon Chief Rumsfeld’s Death

The death of former Pentagon chief Donald Rumsfeld has rekindled memories of torture and abuse in US wars in Afghanistan and Iraq, with rights groups, reporters and others calling attention to US wars and torture.

Rumsfeld died at the age of 88 in Taos, New Mexico, his family announced in statement on Wednesday without specifying when he died.

Following the attacks of Sept. 11, 2001 on the US, the ex-Pentagon chief and former president George W Bush directed the US War on Terror on Afghanistan, which continues today, and brought devastation and large number of deaths.

Two years later in March 2003, Rumsfeld oversaw the US invasion of Iraq after he warned of a growing arsenal of Iraqi weapons of mass destruction under former Iraqi dictator Saddam Hussein, but no such weapons were ever discovered.

The war lasted to December 2011, when then-president Barack Obama ended the conflict. However, the war reignited in 2013 and saw the US heavily engaged in Iraq until 2017.

The wars in Iraq killed hundreds of thousands, including thousands of US military forces. The total number of Iraqi civilian deaths is unknown. The Iraq Body Count project places the number of deaths since 2003 between 185,724 and 208,831, as of June 30.

Rumsfeld had predicated that the Iraq war would be a short war, saying in a 2002 interview, “I can’t tell you if the use of force in Iraq today would last five days or five weeks or five months, but it certainly isn’t going to last any longer than that.”

Rumsfeld was an avid supporter of torture during his time in the George W. Bush administration – which labeled the practice “enhanced interrogation.”

He personally authorized harsh interrogation techniques for detainees and oversaw the opening of the detention camp at the US naval base at Guantanamo Bay, Cuba, where foreign suspects were tortured.

Jameel Jaffer, head of Columbia University’s Knight First Amendment Institute and a former American Civil Liberties Union deputy legal director, said on Twitter that, “Rumsfeld gave the orders that resulted in the abuse and torture of hundreds of prisoners in US custody in Afghanistan, Iraq, and Guantanamo Bay. This should be at the top of every obituary.”

These techniques came to be known as “advanced interrogation” during the Bush administration, and were determined to be torture by scholars and experts.

Rumsfeld’s advocacy for torture led to war crimes accusations both during and after his tenure with Bush, seeing separate lawsuits filed against him in 2004.

Brought by former detainees at the notorious US-run Abu Ghraib prison in Iraq, as well as the American detention facility in Guantanamo Bay, Cuba, the plaintiffs alleged that Rumsfeld authorized brutal interrogation methods and was responsible for abuses.

A separate tribunal held by the Kuala Lumpur War Crimes Commission in 2012 also found Rumsfeld and other top Bush officials guilty of war crimes in relation to torture carried out at Abu Ghraib and Guantanamo Bay.