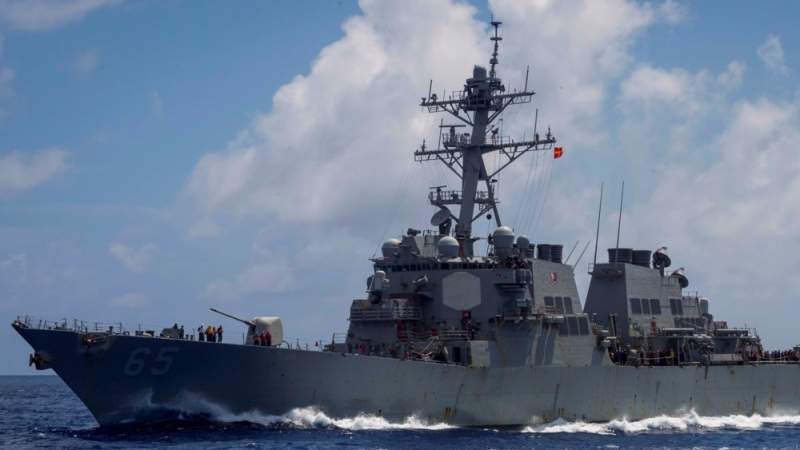 China ‘Drives Away’ US Warship Trespassing in South China Sea

China’s military says it “drove away” a US warship that illegally entered Chinese waters near the disputed Paracel Islands on the fifth anniversary of a controversial international tribunal ruling that Beijing has no claims over the South China Sea.

Chinese naval forces warned the USS Benfold on Monday to leave the vicinity of the disputed Paracel Islands in the South China Sea or “bear all consequences,” after it “trespassed” into Chinese waters.

The Paracels – called the Xisha Islands by Beijing- are also claimed by Vietnam and Chinese Taipei, with Beijing claiming historic rights to resources within the region’s so-called nine-dash line.

Tian Junli, a spokesman for the Southern Theatre Command of the Chinese People’s Liberation Army (PLA), said that the guided-missile destroyer entered the waters of the Paracels without Chinese government approval, undermining the peace and stability of the South China Sea and “seriously violating international law and the norms of international relations.”

While “strongly condemning” and “resolutely opposing” the US move, Junli accused the US of engaging in navigational hegemony “to cause the militarization of the South China Sea.”

“We urge the US side to immediately stop their provocative actions and to strictly control their maritime and air activities,” he added.

US Seventh Fleet rejected the accusations and claimed in a statement that “USS Benfold conducted this FONOP [freedom of navigation operation] in accordance with international law and then continued on to conduct normal operations in international waters.”

“By engaging in innocent passage without giving prior notification to or asking permission from any of the claimants, the United States challenged these unlawful restrictions imposed by China, Taiwan and Vietnam.”

The US move coincided with the anniversary of a 2016 tribunal ruling which rejected most of China’s claims in the South China Sea. Beijing has consistently dismissed the tribunal’s finding.

Amid strained relations between Beijing and Washington, there have been fears that the South China Sea could emerge as a potential flashpoint.

China hoped for an improvement in relations under President Joe Biden, who succeeded Donald Trump in January, but the new administration has shown no sign of backing down on hardline policies toward China.

The two sides are at odds over a range of issues, including alleged human rights abuses in Xinjiang, and Beijing’s policies in regard to Hong Kong, Taipei and the disputed territories in the South China Sea, as well as the origins of the COVID-19 pandemic.

The Supreme Political Council: The people are fed up with the false calls for peace and will fail the escalation attempts of the aggression

WHO Warns against Mixing and Matching COVID Vaccines