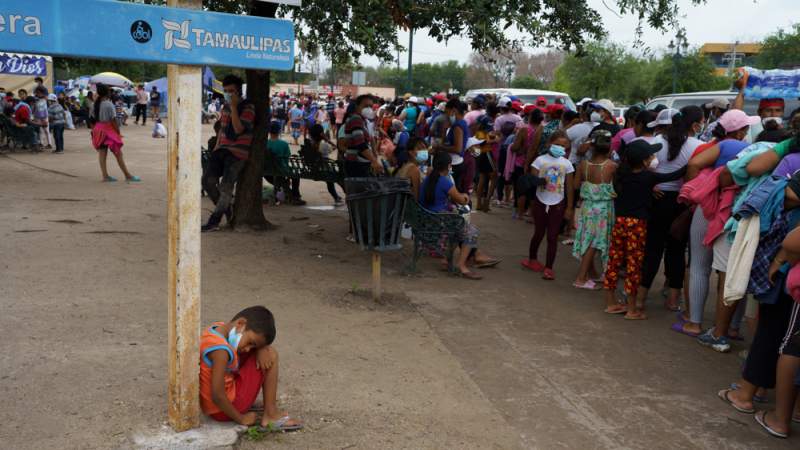 US Republican senators have urged President Joe Biden to keep a Trump-era border policy that allows border agents to expel migrants, without even permitting them to claim asylum, after they crossed into the country from Mexico,

As the White House considers ending the restriction, known as Title 42, before the end of the month, a group of 46 GOP senators warned the president to keep the order in place.

Under the measure, most of the migrants are fingerprinted when they arrived at the border and then expelled into Mexico, without any opportunity to make their asylum claims.

senator Ted Cruz said the measure has been ” an integral and extremely successful measure to protect America’s borders and our people during the COVID-19 pandemic.”

He warned the administration that reversing the policy would “encourage illegal immigration, and create an unprecedented crisis” along the southern border.

Senator Marsha Blackburn said, “Ending this order will have a dire impact on the crisis already engulfing our southwestern border we urge you in the strongest possible terms not to take this action.”

And senator Josh Hawley said that Biden’s “dangerous open border policies have created a moral crisis on our Southern Border.”

“As our country recovers from the pandemic, we should absolutely retain the ability to turn away those crossing our border illegally who pose a threat to the health of American citizens,” he added.

The Biden administration have already defended the retention of the restriction.

US Immigration and Customs Enforcement (ICE) acting Director Tae Johnson told lawmakers in May that the agency “is concerned that the loss of Title 42 could create additional pressure on our immigration system.”

He called the order “critical” to maintaining social distance in border facilities.

Migrant advocates and health experts have called on the Biden administration to immediately end Title 42 expulsions, which they say are not based on science and expose asylum-seekers to violence in Mexico.

The US Centers for Disease Control and Prevention issued the public health order in 2020 to prevent the cross-border spread of COVID-19.

But many advocates said it was an excuse to deny refugees an opportunity to state their case for staying in the United States.

“We knew from the very beginning that the use of Title 42 was only about the Trump administration’s war on immigration, not about health or safety,” said US Rep. Judy Chu, D-California. “Unsubstantiated claims and unscientific justifications were used as grounds for cruelty against people born outside this country.”

Human rights groups say border restriction measures have created humanitarian catastrophe on the Mexican side of the southwestern border.

Tens of thousands of asylum seekers on the Mexican side have been forced to live in danger from disease and criminal gangs.

And the executive’s assault on migrants also created a crisis for people on the US side of the border.

A research said earlier this year that as of February, there had been “at least 1,544 publicly reported cases of murder, rape, torture, kidnapping, and other violent assaults against asylum seekers” who simply pushed back into Mexico.

Among these reported attacks are 341 cases of children returned to Mexico who were kidnapped or nearly kidnapped,” said the study by Human Rights First — an organization that monitors conditions at the border.

Figures show, since Biden took office, arrests at the southwest US border have risen to the highest monthly levels in two decades.

Biden stands accused of inciting a chaotic migrant rush on the US border with Mexico after he vowed to unwind many of the immigration policies of Trump, when he assumed office in January.

His policies led to an influx of refugees and migrant children from South and Central America to the southern US border in recent weeks.

The influx of unaccompanied children at the border has become an issue for the Biden administration, which ordered to use Trump-era detainment facilities to house migrant children.

More than 4,300 unaccompanied children who crossed the US-Mexico border are being held at a makeshift detention center in Texas under distressing conditions.

Both Democrats and Republicans criticize Biden for his handling of the refugee crisis, and failure to provide proper facilities to the migrant children, exposing them to various dangers.

Russia on UK Naval Provocation: Think Hard Before You Test Us Again