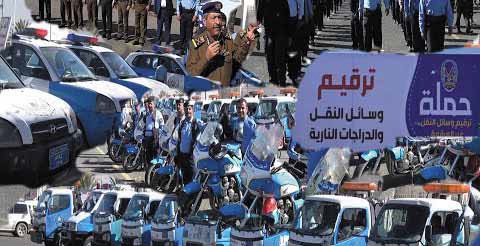 Director of the Traffic Department, “60,000 means of transportation seized since the start of the numbering campaign”

Today, Friday, the Director of the General Traffic Department, Brigadier Bakeel Al-Barashi, confirmed that the number of means of transport seized since the start of the numbering campaign, and until today, has reached more than 60,000 means of transport, including 11,000 during the current month only.

Al-Barashi told almasirah, “A new decision was issued to deal with smuggled means of transportation as non-compliant means, with a value of only 30% with regard to customs.” He pointed out that a traffic control unit was created within the General Traffic Department with the aim of maintaining the control of the street and dealing with violators.

He called on drivers of transportation means to quickly demarcate and number their cars voluntarily, because the General Traffic Department is in the process of implementing upcoming measures towards them. He stressed that the campaign will continue and will not stop, and there are unprecedented facilities for vehicle owners, and they only have to take advantage of the opportunity and the speed of customs and numbering.