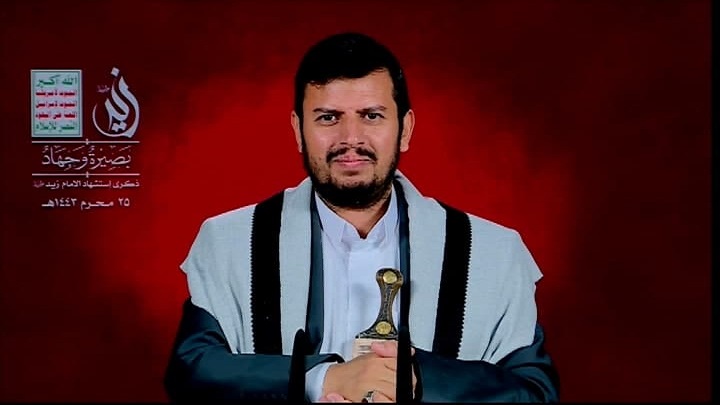 The Leader: Swear to God, God’s Book does not allow us to remain silent about US tyranny against our nation

The leader Sayyed Abdulmalik Badr Al-Din Al-Houthi said during his speech on the anniversary of the martyrdom of Imam Zaid, peace be upon him, that Imam Zaid, as he echoed with his high insight, high sense and high responsibility on the day others preferred to remain silent because they lost their insight, said: “Swear to God, the Book of God does not allow me to be silent.Sayyed said today we are with our insight as Yemeni people ” With our faith, jihad, and our faith identity, we say to those who have the options of surrender, submission to the enemies and joining the enemies, “Swear to God, the Book of God does not allow us to remain silent.” He added how can we remain silent in the face of US tyranny while our nation is being oppressed and our peoples are oppressed in Palestine to Yemen, Lebanon, Syria, Iraq and Bahrain to the various peoples of our nation?

The Leader pointed out that when the aggression appeared, and until today, the forces of aggression are committing the most heinous crimes that the world has recognized, and no one has been able to cover them for their brutality. However, he who is blind in heart ignores all these facts, stressing that moving with awareness and insight is the right position and the right choice that is consistent with the Qur’an and with the reality is that we are an independent nation and dear people.

The leader revealed that it is known what the enemies want when they entered Al-Mahra to make an American base and a British base there. The Saudis and Emiratis came to Al-Mahra, Hadramawt, Socotra and Mayon, we see the hierarchy in employment and the nature of roles in the aggression. Whoever sacrifices, kills, and redeems himself, the foreigner comes from his Saudi and Emirati successors, and from his American and British successors.

He stressed that we are aware of the reality of the battle and the danger of negligence, and that if we neglected, the American military bases would be in the center of Sana’a and they would be in our various countries and all the strategic areas, and they would humiliate our people and subjugate our people, and we would have no dignity or independence. Our country should be free, independent, and not subject to occupation or tutelage, neither under the seventh nor the ninth item, nor any of the items written by the arrogant pens.

Sayyed. Abdulmalik Badr al-Din al-Houthi pointed out that in this revolutionary and insightful spirit, we cannot be humiliated or subdued, nor can we submit to allegiance to our enemies. With this revolutionary and jihadist spirit, we will not be stingy at the gates of the Princes of Al Saud and Al Nahyan, nor for anyone in this world. Our people will be free and proud, and our project In confronting the aggression and supporting our causes, we do not retreat from them, because we made our decision based on insight, humiliation, humiliation, and shame on the submissive and those who shirk responsibility and pride for the haters.