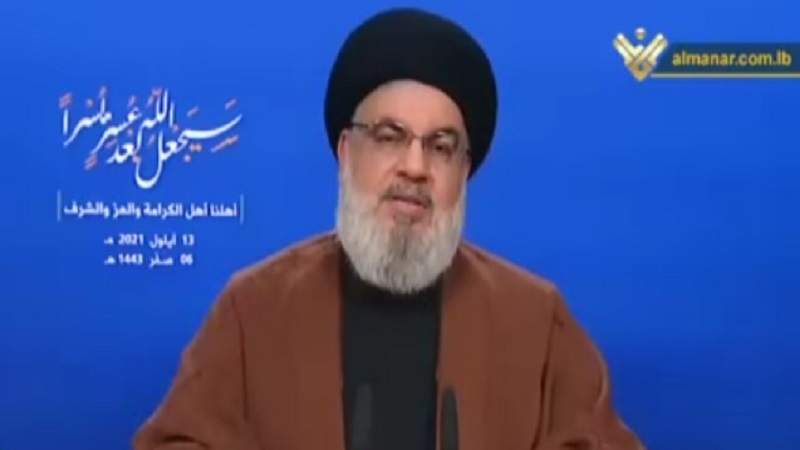 Priorities of the current government in Lebanon should be to save the country from collapse, to carry out reforms and to improve the livelihood of Lebanese people, he said during a speech on Monday.

He added, “We demand that a ministerial statement should be issued as soon as possible in order to gain a vote of confidence and get the country out of the current crisis.”

Regarding the arrival of the fuel vessels, Nasrallah pointed to the destination of the first ship carrying oil products to Lebanon, and stated, “We had two options, including Lebanon or Syria.

In order for the Lebanese government not to get into trouble and not be subject to sanctions, we decided that the destination of ship would be in Syria and then the cargo would enter Lebanon.

Syria facilitated the movement of oil cargo towards borders in Baniyas Port and provided security of the ship. The first ship carrying petroleum products arrived in the port of Baniyas on Sunday night, and today its unloading will be completed.

In this regard, Sayyed Nasrallah clarified that Hezbollah does not aim at engaging in an economic competition with the Lebanese companies concerned with importing oil, stressing that the Resistance Party wants exclusively to relieve the socioeconomic agonies of the citizens and the rest of residents in Lebanon.

Commenting on September 13 (1993) Anniversary, he indicated that the Resistance Party and Dahiyeh locals reacted patiently and wisely with the Lebanese military attack on the protesters against Oslo Agreement, adding the outcome of that patience appeared in the joint fight and martyrdom of Hezbollah fighter and the Army soldiers against the Israeli occupation forces in 1997.

Regarding Gilboa Escape Operation, Hezbollah Secretary General hailed the escape operation of the six Palestinian prisoners who broke out of Gilboa jail despite all the Israeli security measures, considering that it reflects the bravery and innovation of those who carried it out.

Sayyed Nasrallah stressed that the escape operation delighted all the honorable people and that the recapture of four of the prisoners does not mitigate its repercussions, calling for protecting the two remaining prisoners.

He concluded by saying “ the 16th anniversary of liberating the Gaza Strip: It was a major victory the resistance has scored and it emphasized the benefit of the choice of resistance.  The Liberation of the Gaza Strip led to turning it into a main base for resistance and a source of hope for all the people of Palestine.

US mobilization of its criminal individuals in Yemen.. exchanging roles or ruminating on failure?