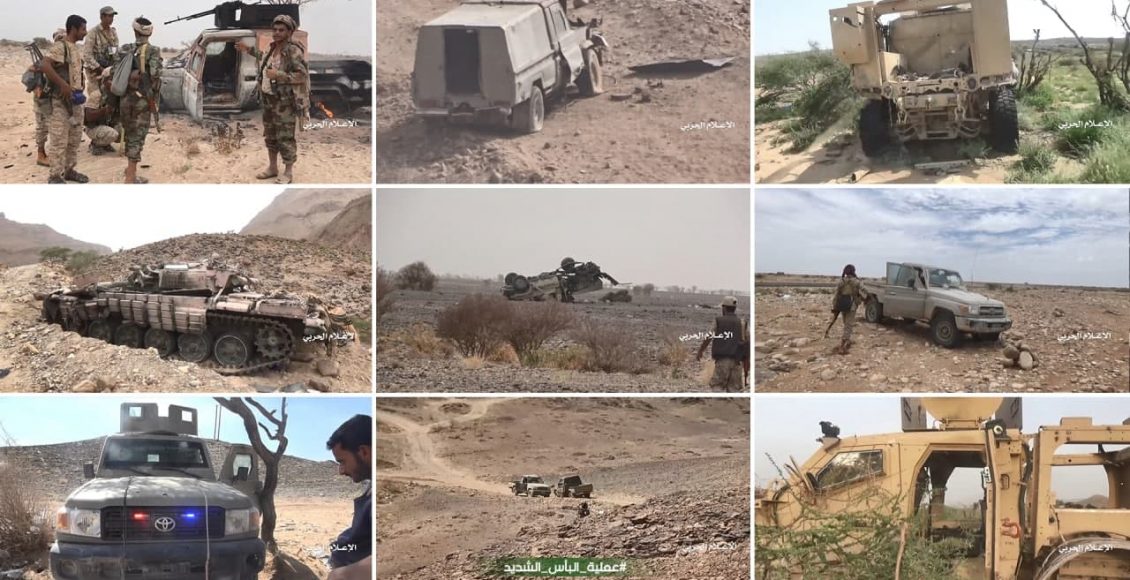 Today, Sunday, the military media eleased the second part of the “Extreme Strength” operation, which was revealed by the armed forces two days ago, which led to the liberation of the districts of Majzar and Madghal in Marib governorate with an area estimated at more than 1,600 square kilometers. The operation also led to the killing and wounding of 15,000 mercenaries, destruction and damage more than 1,500 armored vehicles and tanks, and large quantities of weapons and equipment.

In the scenes released by the military media, the Yemeni Army and the People’s Committees were able – thanks to God – to liberate Jadaan Madghal directorate to encircle Mas Camp from the southern side where the Yemeni Army and the People’s Committees carried out the operation from several tracks according to the operational plan prepared with the participation of various military units. It started with almakhdarah front towards Mas camp and the surrounding areas from the southern side, after completing the purification of the western places of the camp, starting from Al-Jufra and ending with the vicinity of Mas camp from the west direction.

They began the operation from the direction of almakhdarah from three simultaneous tracks “Najd track – aldaiq track –almakhdarah track,” during which they were able to purify dozens of sites, Al-hills and villages, including Al-Soud, Al-Sayyad, and Asida hills,and Jadaan village and the historic Jadaan Castle.

Those who came from Najd path cut off Hailan line linking with almakhdarah and the surrounding fronts in order to be able to control Hailan Triangle and stop the enemy’s reinforcements and force them to try to take dirt roads to confront their advances.

They continued their advances from the three tracks until completely clearing Jadaan Madghal district and blocking asphalt line that connects Mas Camp to the city of Marib, all the way to “Tebbin” Mount and hills overlooking the camp.

The scenes of the operation showed that the gatherings and fortifications of the mercenaries of the aggression were targeted after a careful monitoring process.

The scenes presented heroic stances of them while storming the mercenaries’ sites and fortifications in direct confrontations, showing the courage and bravery of the various military units participating in the operation.

The scenes showed the progress of them and their ability to liberate the sites amid successive losses that forced the mercenaries of the aggression to flee and leave their positions.

The scenes showed the aggression’s mercenaries’ violations of civilian objects and their taking of villages, homes and public facilities as military barracks.

They also documented the occurrence of large numbers of dead and wounded among the mercenaries, amid rapid collapses, which were reflected in the scenes of the mass escape of their mercenaries in front of their advance.

The scenes , in addition, documented the ability of them- by the grace of God – to destroy and damage dozens of tanks and armored vehicles belonging to the mercenaries of the aggression.

The scenes showed evidence of the participation of takfiri organizations in the fighting with the coalition of the American-Saudi aggression and mercenaries in the Marib .

The scenes showed a large part of the quantities of weapons seized by them during the stages of the operation, indicating the heavy losses suffered by the aggression in its equipment.

The scenes, furthermore, showed a prominent aspect of the morals and identity of them in the humane dealings with the prisoners and the wounded prisoners.

Yemeni official: Doubting Guterres is politicized and rejected, and at the request of the aggression countries