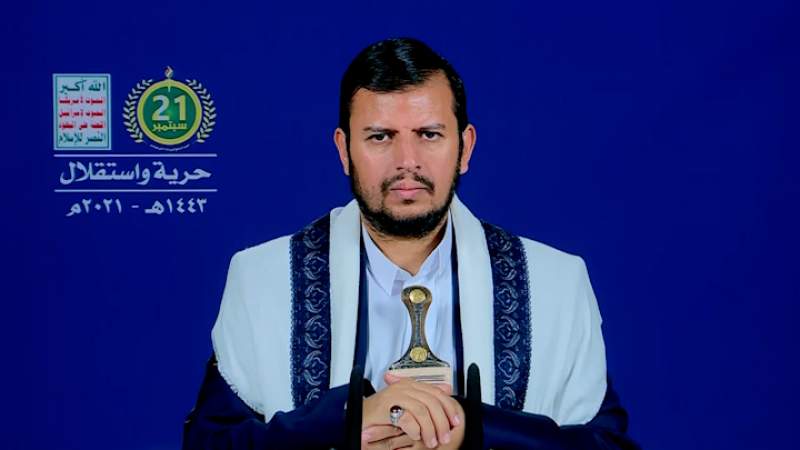 Sayyed al-Houthi: September 21 Revolution was a necessity, we will continue until independence achieved

Leader of the Revolution Sayyed Abdulmalik Al-Houthi confirmed the continuation of the path of confronting the aggression in a revolutionary spirit and a faith identity until achieving complete independence.

In his speech this afternoon on the occasion of the 7th anniversary of the September 21 revolution, Sayyed Abdulmalik emphasized the continuation of correcting the internal situation through reforming the state institutions.

Sayyed Abdulmalik indicated that there are great efforts made to correct the imbalances in the state institutions, but they are facing difficulties, in light of the continued aggression and siege.

The Leader of the Revolution said the United States was in charge of administering Yemen’s internal affairs prior to the Revolution, confirming that such foreign guardianship had led to the collapse and complete occupation of Yemen.

He highlighted that the former regime colluded with the Security Council’s decision to place Yemen under Chapter VII, adding that Washington used to conduct Yemen’s affairs before the September 21 Revolution, and the US embassy in Sana’a had the upper hand over the presidential office.

“There were explosions, assassinations and Takfiri terrorist groups before the revolution. The enemies did their utmost to eliminate the sources of Yemen’s financial and spiritual might, and push the country to the brink of collapse to occupy it,” Sayyed Abdulmalik said.

The Leader underlined that the September 21 Revolution represented people from all walks of Yemeni society as well as various tribes and political parties.

Sayyed Abdulmalik described the revolution by saying: “The September 21 Revolution is one of the greatest high-end revolutions with no hate campaign, riots or acts of vandalism.”

“The US, however, left no stone unturned to prevent the formation of a viable government after the revolution. Much to its chagrin, American troops had to withdraw from Yemen,” he said.

“The US imposed aggression against Yemen to prevent the nation from attaining their goals. Yemenis have been steadfast and made tremendous sacrifices in the face of the aggression,” he added.

The Leader considered the most important achievement of the September 21 Revolution that it stopped the absurdity that was heading towards the collapse of the country, and that it put an end to foreign tutelage.

“The revolution restored the dignity and freedom of our country. Our people are confronting American and Israeli policies.”

Sayyed Abdulmalik also explained that the security achievements in the liberated governorates are tangible, and that the difference is very large in security, economics and in all fields with the occupied governorates.

He said Yemen’s Sana’a-based National Salvation Government is working to reform state institutions in the country, and is eager to forge friendly relations with all its neighboring countries and the international community.

The Leader concluded that Yemen will continue until independence is achieved.

Sa’ada witnesses a massive women’s celebration to commemorate the…