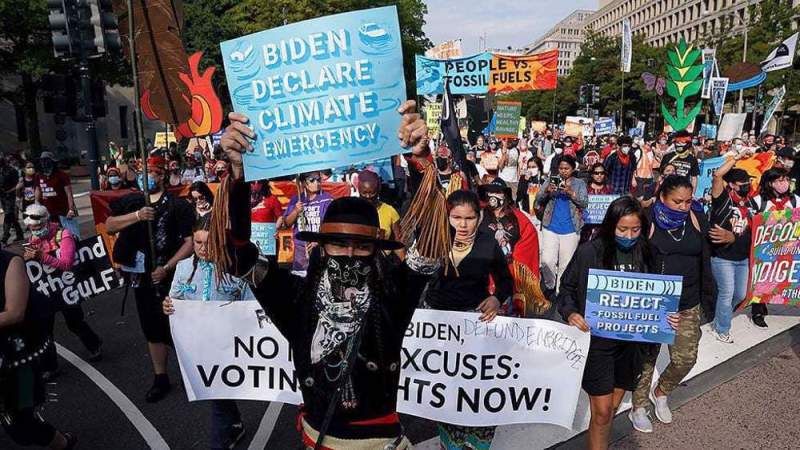 US Police Arrest 655 People During Climate Protests in Washington

Police arrested 90 people only on Friday during this week’s “People vs. Fossil Fuels Mobilization,” the final event at the Capitol which raised the total number of arrests to 655 for the week.

The protesters are seeking to push President Biden to stop approving new fossil fuel projects and declare a climate emergency.

Activists said on Thursday more than 50 Indigenous advocates “launched an occupation” of the Bureau of Indian Affairs (BIA) — an agency within the Interior Department.

The activists have also said that there were dozens of arrests at this event and added that police used stun guns on some protesters.

US Interior Department spokesperson Melissa Schwartz, however, claimed in a statement that “multiple injuries were sustained by security personnel, and one officer has been transported to a nearby hospital.”

The Indigenous Environmental Network (IEN), which is a broad alliance of tribes, Indigenous rights groups, labor organizations, and others said in a statement on Monday that Biden “has consistently fallen short of protecting the water that sustains all life on Mother Earth and continuously failed to honor our treaties.”

The alliance noted that Biden has so far not moved to block Enbridge’s Line 3 replacement project in Minnesota, where Native Americans have led several demonstrations.

“If President Biden was committed to honoring the treaties and strengthening sovereignty, he would implement a policy of Free, Prior, and Informed Consent by executive authority and act swiftly to mitigate the climate chaos that has engulfed our communities by ending the anti-Indigenous US legacy of fossil fuel extractivism,” the statement added.

The demonstrations come as Democrats in Congress struggle to get Biden’s $3.5 trillion infrastructure bill with major climate provisions across the finish line amid objections from more conservative members of their caucus.

Major climate program likely to be nixed from spending package

According to reports, a major climate program is likely to be removed from the Democratic spending plan amid opposition from Democratic Senator Joe Manchin.

The program is called the Clean Electricity Payment Program, which would incentivize utilities to shift toward clean sources of energy using a mix of grants and fines.

The massive spending bill is opposed by Republicans. So, Democrats are trying to pass it through a budgetary process called reconciliation. But this process would require a “yes” vote from every Democratic senator. However, two Democratic Senators Kyrsten Sinema and Manchin are opposed to it.