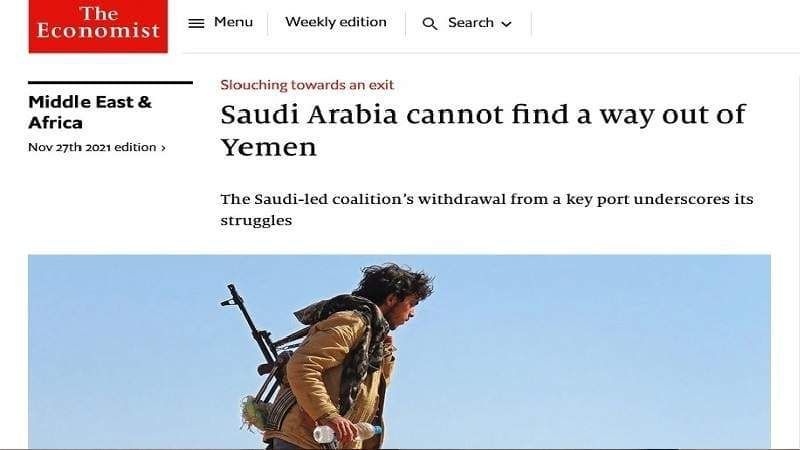 An international magazine described the Saudi rulers as risking foreign wars to cover up their great failures inside the kingdom, noting that they are unable to find a way out of Yemen.
The Economist said that “Saudi rulers hide their failures behind the nation’s flag and patriotic sentiments, and they risk foreign wars to distract attention from their great failures at home. As tyrants love the presence of an external enemy, and sometimes believe their own propaganda, but these mistakes will eventually lead to their downfall.”

The magazine dealt with the developments of the military situation in the field in Yemen, revealing aspects of “profit and loss” for both parties, considering that Saudi Arabia has become embroiled in the Yemeni quagmire and is unable to find a way to salvation.
It stressed that the Saudi-led coalition withdrew from Hodeidah, which has an important strategic location, being the main port of Yemen on the Red Sea coast, in mid-November, mocking Saudi Arabia’s denial of what happened as a withdrawal.

The magazine mocked Saudi Arabia’s view of this withdrawal as a major shift in the front lines, considering that these statements were made with the aim of belittling what happened. The magazine stressed that Hodeidah was once a priority for the coalition, but today it represents a sideshow to the larger battle taking place 260 kilometers (162 miles) to the northeast in Marib. It also indicated that the capture of Marib represents a symbolic and strategic victory for Yemeni Salvation government.

On this matter, the report said that the war which has started since 2015 has become a quagmire, costing the Kingdom countless billions and damaging relations with the main partners, especially USA. The Houthis, according to the magazine, launched attacks with drones and ballistic missiles.

Fauci Says US Is Not Locking Down to Fight Omicron