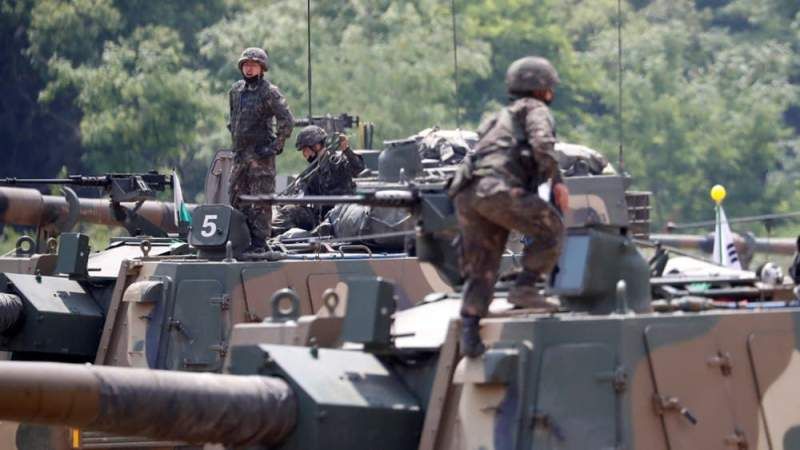 Senior military officials from the United States and South Korea are set to meet in Seoul to develop “a new, operational war plan” against North Korea, amid rising tensions on the Korean Peninsula.
The new war plan is to be finalized in the 53rd so-called annual Security Consultative Meeting (SCM) scheduled to be held late on Wednesday, with the participation of US Secretary of Defense Lloyd Austin, chairman of the Joint Chiefs of Staff General Mark Milley, and South Korean officials.

According to senior US defense officials who spoke on the condition of anonymity in order discuss the process, the new plan will replace existing strategies for responding to potential North Korean aggression that were devised nearly a decade ago and do not correspond with Pyongyang’s military progress.

“This is the right thing to do,” a senior defense official told reporters en route to Seoul for the meeting, adding that North Korea had advanced its capabilities and that “the strategic environment has changed over the past few years.”

The official further described the process of updating the existing plans as an “extensive and intensive effort” with no set deadline for completion.

A second senior official claimed that the changes were not only the result of ongoing North Korean provocation but “a natural evolution to changing circumstances.” The official said that South Korea’s advanced capability development and its ability to contribute to the plan were an important part of the update.

Meanwhile, Seoul is seeking to persuade Washington to back an “end of war declaration” as a way to jump-start stalled denuclearization talks with North Korea.

US officials have signaled support for such a declaration, but say there may be disagreements with South Korea over the sequence of such measures.

Another issue expected to top the agenda is South Korea’s efforts to win wartime “operational control” of combined military forces.

“During the discussions, General Milley and General Won recognized the enduring alliance and highlighted significant advancements made to strengthen cooperation,” according to a joint statement.

Austin is due to meet with Defense Minister Suh Wook on Thursday, and attend ceremonial events as well. He has expressed hope that the talks will see Seoul take a larger role in future military plans for the region.

US defense officials also emphasized that South Korea was “particularly well-positioned” to play a positive role, adding that saw Seoul as “a net provider of security not just on the peninsula but across the region.”

The latest development comes almost a month after the US and South Korean military forces held joint air defense exercises that involved some 200 aircraft, despite Pyongyang’s repeated objections.

North Korea regards the South’s joint exercises with American forces as a rehearsal for invasion and insists that the North’s efforts are defensive in nature.

With dialog at a standstill, US officials have expressed a willingness to meet with their North Korean counterparts in order to resume denuclearization talks. Pyongyang, however, has dismissed the US offer of dialog as a “petty trick,” accusing Washington of pursuing a hostile policy toward North Korea.