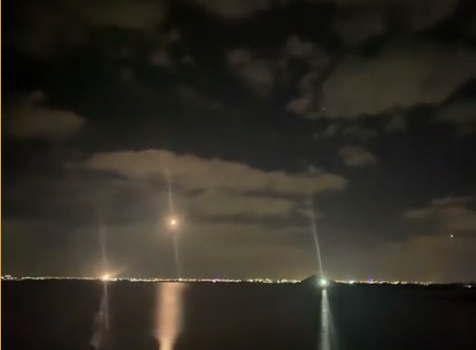 A video clip that was widely circulated on social media, on Monday, showed the failure of the UAE air defense systems to confront the Yemeni missiles that targeted the UAE capital Abu Dhabi and targeted sensitive targets in Dubai.

Yemeni Armed Forces Spokesman Brigadier General Yehya Sarie said, that a large-scale military operation was carried out targeting Al-Dhafrah air base and other sensitive targets in the capital of the Emirati enemy, Abu Dhabi, with many ballistic missiles of Thu Al-Faqar type.

Vital and important sites in Dubai also were hit with a large number of drones of Samad 3 type, the statement.

During the military operation; a number of military bases in Sharora area and other areas in the Saudi territorial depth were targeted with many drones of Samad 1, and Qasef 2 K types, while other vital sites in Jizan and Asir regions were hit with several ballistic missiles, according to the armed forces statement.