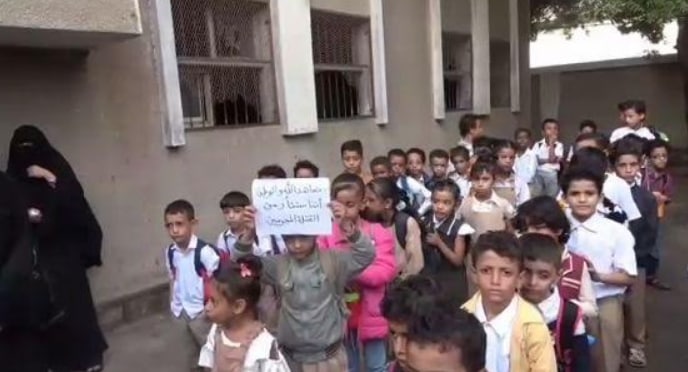 The students of Hodeidah governorate condemned the crimes of the US-Saudi-Emirati aggression, including its violations and massacres of children.

In  Al-Hawk district, students of Al-Ikleel School participated in a protest stand for the students of Khalid bin Al-Walid School to denounce the death of the student Wael Wadih from the third grade of basic education in the bombing of the aggression aircraft, which also targeted the student Ramiz Muhammad from the eighth grade of basic education at Al-Thaghr School in Al-Mina District, and injuring others in the football field in the square next to the communications building during the aggression’s bombing of the building and the Yemen International Internet Gateway.

The advisor of the Education Office in the governorate, Omar Al-Salmouni, expressed his condemnation of the continuation of the aggression in targeting children, and its heinous crimes against civilians and civilian objects.

While the students denounced the shameful silence of international organizations, led by the United Nations and organizations concerned with childhood. They demanded that these organizations carry out their duty to protect children and their rights

Tawoos Calls On The UN Representative To Assume their Responsibilities towards the Continued Escalation, Crimes , Economic Blockade