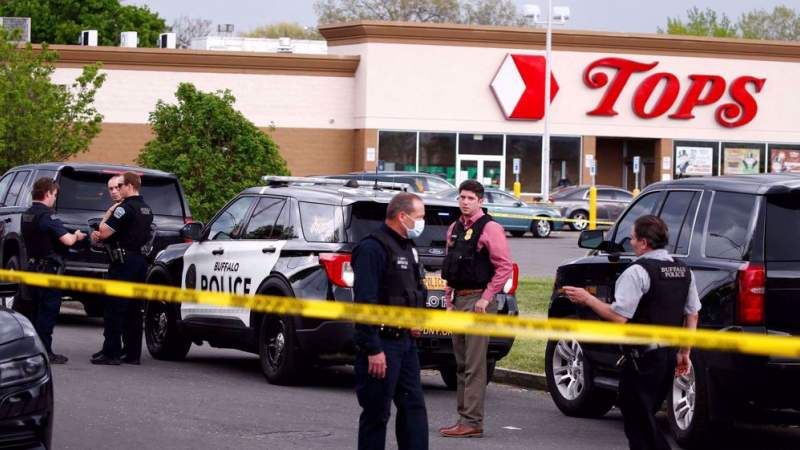 A white American gunman has shot dead 10 people and injured three others – 11 of the 13 victims were Black – at a grocery store in Buffalo, New York, in an act of “racially motivated violent extremism.”

Following the mass shooting on Saturday, the 18-year-old gunman surrendered to police in what authorities said would be investigated as a hate crime.

Authorities said the suspect, who was armed with an assault-style rifle, came to Buffalo from a New York county “hours away” to target the store in a predominantly Black community.

Eleven of the 13 people struck by gunfire were Black, and two were white, officials said.

Stephen Belongia, the special agent in charge of the FBI’s Buffalo Field Office, said the FBI is assisting in the investigation as well during a news conference.

“It was straight-up, racially motivated hate crime from somebody outside of our community, outside of the city of good neighbors as the mayor said, coming into our community and trying to inflict that evil upon us,” Garcia said.

“Ten people were killed by a gunman dressed in body armor and armed with a high-powered rifle, while three others were wounded — two of them critically,” reported local daily The Buffalo News, citing a police official at the scene and another source close to law enforcement.

The police are investigating whether the shooter livestreamed the attack, the paper said, as has been alleged on social media.

“It’s like walking onto a horror movie, but everything is real. It is Armageddon-like,” a police official told the newspaper.

“I’m actively monitoring the situation with the grocery store shooting in Buffalo. We are standing with the people of Buffalo,” said the senior US senator from New York state, Chuck Schumer, in a tweet.

The Erie County Sheriff’s Office expressed its condolences, adding that Sheriff John Garcia “has ordered all available resources and personnel to assist” police.

New York Governor Kathy Hochul tweeted, “I am closely monitoring the shooting at a grocery store in Buffalo. We have offered assistance to local officials. If you are in Buffalo, please avoid the area and follow guidance from law enforcement and local officials.”

A US law enforcement official said the scene was no longer active and there were no other suspects outstanding.

“We are shocked and deeply saddened by this senseless act of violence and our thoughts and prayers are with the victims and their families,” Tops Friendly Markets said in a statement. “Our top priority remains the health and well-being of our associates and customers. We appreciate the quick response of local law enforcement and are providing all available resources to assist authorities in the ongoing investigation.”

Taking off the First Commercial Flight Proves the Airport’s Readiness, Refutes the Allegations of Aggression