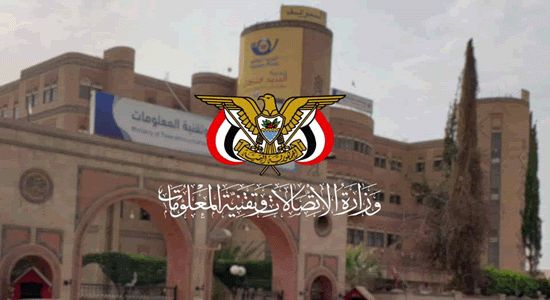 The Ministry Of Communications Calls for an End to all Forms of War, Destruction of its Infrastructure

The Ministry of Communications and Information Technology renewed its call on the United Nations, the International Telecommunication Union and all humanitarian and international organizations to stop all forms of war, destruction and violations of the infrastructure of the communications network and the Internet and its civilian facilities.

He also called on the ministry, in a statement issued on the occasion of the World Telecommunication and Information Society Day, to end the siege imposed on civil-use communications equipment, supplies and systems and to facilitate their entry into Yemen, which contributes to alleviating the suffering of the Yemeni people.

The statement called for urgent work to secure the arrival of the necessary technical equipment to restart the destroyed communications and information technology sites and towers and restore service to the affected areas, to ensure that communications services reach the elderly and millions of their families in Yemen.

The statement called for intervention in order to secure the installation of the submarine cable (SMWS) and its substations in Hodeidah governorate, owned by Yemeni Telecom and operating them unconditionally, as well as enabling Yemeni telecommunications companies to use the submarine cable (AAE-1) and its landing station in Aden, which has been ready for operation since 2017, which is owned by TeleYemen and the Public Telecommunications Corporation, and restart the marine internet cable “Aden – Djibouti” to its full capacity.