Since the beginning of the aggression on Yemen, everyone is watching the huge amount of lethal weapons, cluster and fragmentation bombs, American and British-made, being thrown over the heads of civilians. Over the past seven years and until now, the remnants of these deadly weapons are still a major threat to Yemenis. Cluster bombs were scattered over large areas and have claimed the lives of hundreds of citizens, including children and women. The remnants of the aggression of lethal and cluster weapons still fill Yemeni streets and cities. Every day we hear about a cluster bomb exploding on children, women, or Yemeni citizens.

The Saudi-led coalition of aggression dropped 3 million cluster bombs on the Yemeni people:

Many of the bombs dropped on Yemen by the coalition of aggression are of these types: destructive, cluster, fragmentation and phosphorous bombs, despite the fact that these bombs are considered forbidden from an international humanitarian perspective due to their environmental impacts, and the fact that they lead to human extermination and destroyed infrastructure. 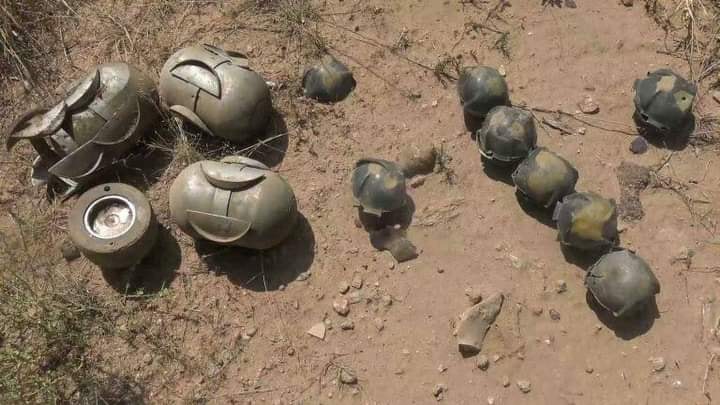 Recently, the head of the Executive Center for Mine Action in Yemen, Brigadier Ali Safra, revealed shocking statistics about the number of cluster munitions rained down by the forces of the US-Saudi aggression coalition on the Yemeni people over the eight years of the aggression, as he stated that over 3 million cluster munitions have targeted a number of 15 governorates and 70 districts in the country.

The Executive Center for Mine Action shows that large areas in Yemen have turned into a minefield due to the huge number of cluster bombs that the coalition of aggression dropped on populated areas over the past seven years. Of course, the areas that were targeted by cluster, fragmentation and phosphorous bombs are populated areas.

Huge numbers of victims of mines and cluster bombs:

Despite the great problems in monitoring and documenting the tragic consequences of cluster bombs on citizens, huge numbers of victims of mines and explosives left by the aggression on Yemen were recently revealed. The United Nations Development Program office in Yemen confirmed that landmines and explosive remnants of the aggression have caused, since the year 2018, in killing and wounding of more than 1,800 civilians, including 668 children and women.

In the same context, the Executive Center for Mine Action stated that the large spread of war remnants and cluster bombs dropped by the coalition of aggression on Yemen in all governorates, even in the capital Sana’a, resulted in the killing and injury of thousands of civilians and prevented thousands of families from returning to their homes and benefiting from their lands.

Preventing the entry of detectors and supplies needed to remove explosives:

Despite the extent of pollution and the spread of cluster bombs and war remnants, the coalition of aggression against Yemen is preventing importing detectors affiliated with the Executive Center in Sana’a, according to the United Nations Development Program, although these devices are considered humanitarian according to the Ottawa Convention Article VI, Paragraph No. ( 2).

While the Executive Center for Mine Action receives humanitarian appeals from the local authorities and citizens in the governorates to send teams to intervene and save the lives of civilians and clear their lands and farms of mines, cluster bombs and remnants of war so that they can return to their areas and practice their normal lives in their villages, the coalition of aggression is denying entry of detecting devices, and supplies needed to remove explosives. Thus, the Mine Action center faced difficulties to intervene and respond to the civilians.

It is worth mentioning that the suffering of Yemenis as a result of mines is not limited to the mines of the American-Zionist-Gulf aggression, but it began many years ago, when the former regime used mines in large areas of the country, during the six wars waged by the former regime against the people of Saada, where the governorate of Saada and regions close to it have the most land mines.

An attempt to vindicate the coalition of aggression:

Undoubtedly, the reduction in international and human rights reports on the number of victims of cluster bombs in Yemen is an attempt to vindicate the coalition of aggression and change the facts on the ground, especially since Yemen is facing a disaster and pollution from cluster bombs of multiple types and from different nationalities. The bulky size and scope of the contamination put Yemen in second place after the Republic of Laos, despite the big difference in the weapons used in Yemen, if we put that into mind.

For its part, the Executive Center for Mine Action held the United Nations, along with the coalition of aggression, responsible for the continued fall of more innocent victims and the transformation of thousands of civilians into handicappeds; As a result of the failure to provide the required field equipment and supplies and solve the problem of preventing their entry or identifying the party that obstructs and impedes this humanitarian work under the Ottawa Convention and its protocols.

Mines keep killing, even during the armistice:

The Yemeni people are exposed to the danger of death or permanent disability every day as a result of the mines scattered in populated areas, on the sides of roads, in fields and on farms. Despite the announced truce for an additional two months, these mines do not know the language of stopping, but rather continue to claim innocent lives and amputate their limbs. Many Yemeni lost their limbs due to these mines, and others have been through tragedies because they lost loved ones in these “death fields” scattered in the country.

Al-Ezzi: The enemy must accept the initiative to open the roads, and we will not allow any conditions outside the agreement