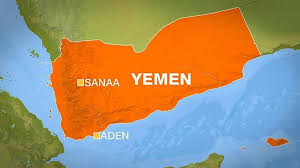 The city of Aden, in southern Yemen, witnessed Saturday angry protests against the UAE-Saudi Council of agents.

Thousands of citizens demonstrated in front of the Ma’ashiq Palace, demanding the dismissal of the council, threatening to storm the palace, which is used by the members of the council, as their “Presidential Palace”.

The protesters raised slogans denouncing the Saudi-backed government’s neglect of their suffering, stressing the continuation of the protests until the departure of the UAE-Saudi Council of agents from the city.

These protests coincide with the recent collapse of the security and economic situation in the occupied southern governorates, in light of the ongoing fights of the aggression militias.

Aden and southern governorates are witnessing security chaos, and almost daily crimes, under the control of the forces of US-Saudi aggression and Saudi-Emirati occupation. They witness increasing of assassinations involving military security leaders, religious and social tendencies, kidnapping, bombings and clashes between militants fighting for influence among them.

Al-Ruwaishan: What achieved is not equal to 10% of what announced in the truce